Barrington of the Lights

Every Spring, the first cuckoos Cuculus canorus and first swallows Hirundo rustica return to our valley; the latter making mud-pie nests under the rafters of our sheds and raising their young. It is one of the marvels of the natural world that small vertebrates should make such a long and hazardous journey. It is a triumph of natural history / science that we know something about how these mighty migrations are achieved. Before the 1890s, evidence of long-distance bird travel was largely anecdotal. Pfeilstorchen - German storks wounded by arrows of North African origin - were noted in 1822. Catching birds with mist-nets and putting a small uniquely numbered aluminium ring on one leg is one way by which a bird can be reliably identified in both Europe and Africa . . . but not at the same time! - they aren't electrons. Without this incontrovertible physical data, bird migration would be frankly unbelievable. If you can ring one bird in a mist net, you may as well ring hundreds and soon enough there is a number-crunchable dataset.

Another way of getting a handle on the problem is to document and place and time of appearance of members of a given bird species rather than individual birds. Reliably identifying the species of birds, especially little brown jobs LBJs, is a task that requires skill and experience but can give population level data. Like little old me recording the time of arrival of the swallows at S825481 every year. Those anecdotes are kinda useless unless bundled up with numerous other reliable sightings across Europe and, at the other end of the year, Africa. 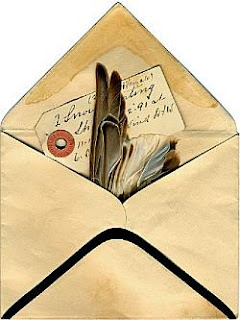 In the 1880s, a group of ornithologists in the Western European Archipelago WEA devised a cunning moth-trap plan to generate a lot of data about incommming birds to the islands. This was to mobilise the services of lighthouse keepers to record what birds crashed into their windows on moonless nights and fell dead to the ground to be picked up the next morning. Richard Barrington [RIA bigraphical note] of Fassaroe Co Wicklow was one of the Point people to get an address list from the Commissioners of Irish Lights and set up a correspondence with the keepers around the coast. They were requested and required to send Barrington a leg and a wing with a note as to time and place [as L]. After the initial project came to an end, Barrington continued to collect data for the next 20 years and published his report of some 30,000 dead birds in 1900. It had a thoroughly Victorian title: The migration of birds, as observed at Irish lighthouses and lightships including the original reports from 1888–97, now published for the first time, and an analysis of these and of the previously put together with an appendix giving the measurements of about 1600 wings. Barrington found that dark nights were key: only 16% [106/673] of the dead were recovered when the moon was more than half full.

One of the unexpected outcomes was that some of the keepers became expert twitchers before that, somewhat pejorative, name was coined; being able to distinguish redwing Turdus iliacus from song thrush Turdus philomelos for example. Lighthouse keeping required having operatives on site to maintain the light, wash salt off the optics, check the oil-levels; but these tasks filled only about 1 hour a day. Being on sight to report passing ships and ships in distress was an additional benefit of having people stationed in those remote and rocky places. But the excitement of a sea-rescue was too rare to stave off the boredom of the daily, weekly, monthly round. A man needed a hobby and for some bird watching became a second life. The Boy worked in logistics in Heathrow for a couple of years. The freight company was transitioning to air-freight containers, robots and barcodes but someone had to be on site 24/7 in case one of the containers went on fire or came of the rails and crashed 30m to the floor. On being pushed he estimated that he was actually working for about 5% of his shift, the rest was paperwork and minesweeper. 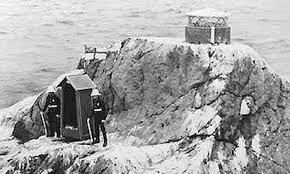 Barrington was a bit of an adventurer. In 1886, he helped fund an exploratory expedition to Rockall [R being defended by British marines], with Robert Lloyd Praeger [prev] and a handful of other naturalists aboard. They were checking to see if it was feasible to set up a weather station on the rock. The fact that the weather precluded them from even landing, let alone holding aloft an anemometer, put the kibosh on Met Station Remote. But that didn't stop the lads from doing circuits round the outcrop counting gannets or whatever it is that twitchers do with their binoculars. He also wagered a pal £50 that he could walk from the Royal Irish Academy in Dublin to the summit of Lugnaquillia and back - that's about 120km along and 925m up - in 24 hours.  He lost, but not because he wimped out.  He's not to be confused with his brother Charles Barrington - Barrington of the Eiger - who made the first ascent of the Eiger . . . because he was on holiday nearby in Grindelwald.
Barrington, R and his lighthouse project is mentioned in Anthony McGeehan's 2018 profusely illustrated and mapped book To the Ends of the Earth: Ireland’s Place in Bird Migration.
Posted by BobTheScientist at 07:33