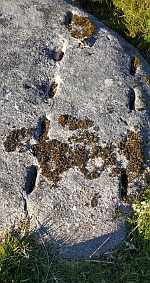 We are signed up to Blackstairs Farming Futures BFF, and I have undertaken to log all the evidence of human impact on the environment that will be here in 200 years time. "the environment" here being the 200 hectares which we own in common with 18-20 other neighbours. It's fun because I get to name the artifacts which I find. The more obvious artifacts like the Sitka spruce Picea sitchensis plantation, or the sheep-proof fence that separates it from the commonage; or the sheep themselves? None of them are likely, let alone guaranteed to be there, then. But the stones, split by judicious and musical hammers and wedges? The rocks remain [Horslips] [Maxwell]. I show [L] the most obvious example [it's the parallel lines of wedge-holes, silly] of a project to craft a lintel or doorstep from a granite boulder. For whatever reason the mason stopped his own gallop one minute and cried "Feck it! this is going nowhere" and started work on a more promising rock. It is a snap-shot in heritage time quite as vibrant and informative about human activity as Stonehenge or the pyramids if a trifle more humble.

BFF is a pilot study to help imagine and then create a more productive future for Ireland's upland habitats: there's got to be more to it than burning the heather, running some sheep and planting out more spruce deserts. Can we, with a deft twist of a limiting factor in the environment [Iron; Foxes Vulpes vulpes; Pasteurella haemolytica; blocked drains; impenetrable forests of gorse Ulex europaeus] change the whole landscape like The Man Who Planted Trees? Yesterday, eleven of our commoners rented a minibus and directed it to a Teagasc showcase in Hollywood, County Wicklow. We The Eleven sat in the Hollywood Community Hall for an hour being talked at by ecologists and agrifunctionaries. |Then we were bussed up towards the hills to a commonage called Granamore [view below] to see how ten farmers with mountain rights can get round a table and then round a trough of sheep dip and talk out a sustainable future for their lives and livelihoods . . . and give access to hikers and orienteerers and kite-flyers. They told us a little about the practicalities of road-mending; river-fording; draining; controlled burning and a bit of tree-planting. 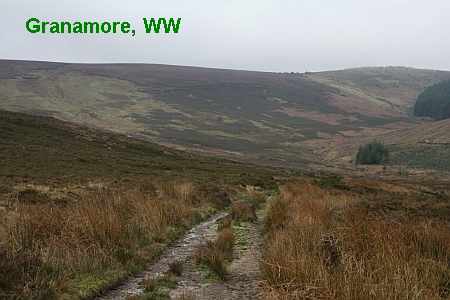 One qualified statement got me thinking. They showed a poster of sustainable stocking rates (in ewe-equivalents / hectare) for
upland grassland 1.5-5 ee/ha;
dry heath 1-1.5 ee/ha;
wet heath 0.75-1.0 ee/ha;
blanket-bog <0.75 ee/ha.
Those rates are different for the different habitats but all those habitats are represented on Granamore Common . . . and here are no fences. How to keep most of the sheep out of the blanket bog and more on the few patches of good, palatable, nutritious grassland? One cunning plan that has had some success is to lug a 20kg bucket of mineral lick [essentially candy for cows and sheep] to the areas covered in deergrass Trichophorum cespitosum or matgrass Nardus stricta as a honeypot. While there the sheep will eat some matgrass [though it's a bit bleh to normal sheep], trample some deergrass and give better grass elsewhere a chance to grow after, say, a controlled conflagration. All that is predicated on the fact that farming hill sheep is a really unproductive way to earn cash for children's shoes and cornflakes. Farmers will be better off spending time taking sheep to the mart; working in the mart; shearing, ploughing, mowing and baling for their neighbours; working for Teagasc or as a teacher.

Chris "Drummer" Stewart [Driving Over Lemons is wonderful] retired young to Andalucia to potter and write. He earned an honest crust as a sheep-shearer and got to know his neighbours. Several of them were shepherds who were active on the hills more or less all the time. I always thought that the shepherd and his mastiff's primary task with sheep was to prevent predation; and to stop them wandering into the next village for vino tinto y tapas. Wrong! especially now that we have decimated all the top predators. The shepherd can, by her presence, gently shift the flock wholesale from areas-to-be-protected to areas-where-they-are-a-grazing-asset. Even a chap can serve this purpose: load up his smartphone with credit and let him off up there being useful.
Posted by BobTheScientist at 07:32