We are involved in a Five Year Plan to re-purpose Ireland's uplands. "We" being the owners-in-common of a hill, on the Wexford edge of County Carlow, 200 hectares in extent. It is supposed to be a Pilot Study, so that what we learn may be rolled out to inform policy across Ireland and across Europe. One aspect of the trial is that it is meant to be, philosophically, driven bottom-up rather than top-down. Previously, farmers have been treated as generic units too individualistic and independent [and uneducated] to be able to decide what's best for their own townland, let alone county, country and the whole EU. Instead,  cunning plans have been dreamt up by a feller with a BSc in Ag Sci sitting at a desk in Brussels or Dublin. This centralised approach a) ignores the local specifics so that everyone gets the same treatment b) generates an extensive network of checking and accountability and box-ticking to ensure that the money has not disappeared into someone's trouser pocket to be spent in the pub.  Bottom-up means that farmers decide what's best for their chunk of habitat and money is allocated to facilitate these aspirations.

The Blackstairs Farming Futures scheme is our Pilot Study and our learning experience and we are doing the best we can. Last year, The Boy gave me an Android smartphone to get with with program, Da. I've been using it to take photographs with GPS coordinates and using those to map features of interest on our commonage. Last year, I was finding stones which have been 'worked'  into useful chunks for building and engineering. More recently I've been mapping squares of heather which might be subject to controlled burning later this year I - II. But even after 4 trips up the hills, I still wasn't happy with the data, which were mired in a swamp of inconsistency. Partly this was because the inventory of required equipment was evolving.  Partly, I was learning my trade. 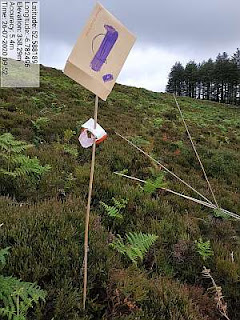 This is what you need:

That [L] is all the information you need. The 'accuracy' is important because it makes you realise that the last 2 digits of the 6-figure grid-refs are 'aspirational' rather than reproducible. The elevation is a handy extra and the time is important as a back up for the location. The order in which the pics get taken is relevant information.  And so, the story so far is captured in Excel and sent for appro to Tom the Eco in Mayo. I will be able to romp through the next set of coordinates now that I have a protocol and equipment inventory. 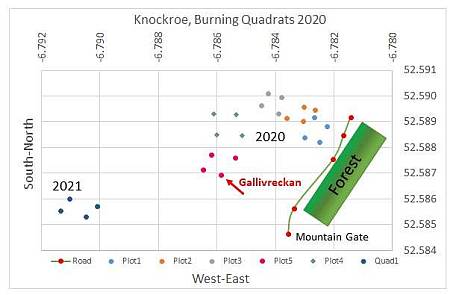