The Blackstairs Farming Futures BFF, Knockroe Division, are under starters orders to get out on the hill and start meithealing away together. Lockdown has put a damper on the project through to the end of June. It's all part of a cunning plan Pilot Study to see if we can't make a better fist of managing Ireland's uplands. Last Sunday 19th July, 6 of us went up the hill to find areas of heather "suitable for burning". In my book NO area is suitable for burning because by turning the above-ground parts of plants into carbon-dioxide you are sending irreplaceable micro-nutrients in a great black plume into the next county. But I am in a minority of One on that. So like Lyndon Johnson on the hideous Edgar Hoover, it seemed better to be inside the tent pissing out than outside the tent pissing in: boycotting the procedure will deprive me of agency in influencing the process. 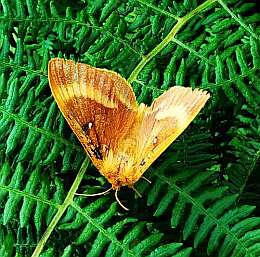 One sub-text of the BFF project is to promote community by incentivising neighbours to talk to each other and work together. That's been a roaring success, especially for blow-ins like us. I hope the neighbours have seen that, despite the funny accents and the Birkenstocks, we are within the normal range . . . and not above getting dirty and wet while cleaning out the drains. There we were following a sheep-path across the face of the hill when I saw a huge umber moth about 5cm across [R slightly less than life size]. I know nothing about lepidoptera beyond that butterflies have bobbles on the end of their antennae and moths don't. So I referred ID to Angus Tyner: tree-hugger; fell-runner; naturalist; mothista; but I heard nothing probably because my email records are, like me,  old. And also to Des Higgins [bloboprevs]: who affirmed that it is an oak eggar Lasiocampa quercus or rather Northern eggar, the morph typically found in Ireland. The common name and the quercus is from the resemblance of its cocoon to an acorn. I was, of course, delighted to see the thing itself up close and to get a name; with a [Latin] name you can tap into the combined knowledge of hundreds of naturalists. And because I've got GPS coordinates on my camera, I can probably find the moth again.

On our expedition to identify areas of leggy heather of about half a hectare in extent, we were not communicating terribly well. The two who are real shepherds and spend a lot of time on the hill looking at, and for, sheep, yomped off up a sheep-path and the rest of us struggled after them. It was a 4-limb scramble in parts with the ever-present danger of a leg disappearing down a hole between two rocks. One of my neighbours, faced by another near-vertical obstacle, tossed her water-bottle to the ground to free up both hands. I could have offered to carry the bottle in my ruck-sack; I could have gone back the few feet and picked it up; I could have chid her for littering. But it didn't seem worth getting on a better-than-thou-sister hobby-horse over a plastic bottle. So we all went on . . . until we didn't. Eventually, the distance between the two shepherd-yompers and us 4 clompers extended beyond shouting distance and we paused [again] to admire the view. And after a short while, turned for home: we were two hours out; it was almost getting dark; and was that a rain-cloud incommming?