It's a biome! Dry heath is an intermediate stage in ecological succession; where well-drained soil is paused in its journey to becoming a real grown-up forest. This adolescence may be extended for decades if someone runs a bunch of sheep across the landscape and they nibble nibble to scarf up any wannabe trees before they become saplings. The Red Hill, for which our townland is named, is 200 ha. in extent and owned in common by ~20 shareholders. The Department of Agriculture and their puppet-masters in Brussels are interested in doing something different and potentially more productive with Ireland's uplands. On their watch, the foolish application of policies and subsidies has seen the wholesale degradation of the habitat by undergrazing; overgrazing, poaching, soil-erosion; monoculture forestry with invasive species; turf-cutting, not turf-cutting; heather burning. Last year we-the-commoners became part of a pilot study to investigate other uses for the hill than running lean-and-hangry, almost feral, yellow-eyed monsters of the species Ovis aries. Pilot studies are too often driven by haven't-a-clue policy-makers; I suppose, in fairness if they had a clue, it wouldn't need a pilot study.

Whatevs, like. The upshot is that we are now well into our second year of drawing down money from The Man and so, maybe, are in a position to see if anything we did last year has had any impact on The Hill and/or the thinking at head office. I used to share a house with two long-haired botanists (and their long-haired cat) and let's say I was glad I never had to sleep on the dander sofa. But they were super-sound interesting blokes despite having been born across the water.  Project Repurpose has hired another exemplar of the Type, as The Ecologist. And last Saturday a couple of us went for a yomp up and round the hill with Tom the Plant to record the presence / absence of key species on the dry heath. So it was qualitative rather than quantitative research.

Dry heath is increasingly rare in Western Europe and nobody wants to see the last few patches of the stuff disappear under shopping-malls or hundreds of hectares of Sitka spruce Picea sitchensis. There are (at least) three sources of concern: 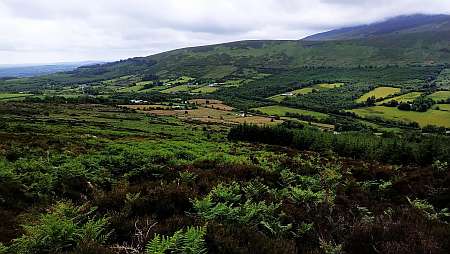 This [above looking southeast towards the plains of Wexford] is what we found.
Tom the Plant needed to record at least 10 of a short list of species indicative / diagnostic of dry heath. He was 9 out of 10 within 500m and 40 minutes of opening the mountain gate, so that ticked the boxes. But he confessed to getting a proper education in the Blackstairs project because every commonage was different and everyone was good. And while identifying and preserving "dry heath" habitat had been a significant driver of the funding, "dry heath" was as hard to grasp and tie down as running water. All that book-l'arnin' was grand but the reality on the side of a blustery south-facing hillside in SE Ireland made for a lot of exceptions. Then again, those names put on biomes do have a predictive quality: if you find tormentil hugging the ground near a bunch of heather you'll be able to make money betting to find heath bedstraw within 5m.
Posted by BobTheScientist at 07:40