The game the whole family can play

Georges Cuvier stoutly maintained that from a single bone, he could extrapolate an entire animal. From an entire skeleton you can infer a lot about the ecological niche its owner inhabited. It's a bit of an ask to go directly from the bone to the biome, because two layers of descriptive fuzziness = noise. I've done my bit [over about 30 years] of reading meaning into DNA sequences [recent - previs - elvis] not all of it frivolous.  But there is a whole level on additional "good pair of hands" skills required to generate new sequence data from really old, poorly conserved, fragmented DNA from bones which have been quietly degrading for thousands of years.  It is amazing that it can be done at all, let alone that the data can reveal expansive insights into the life and times of our ancestors. 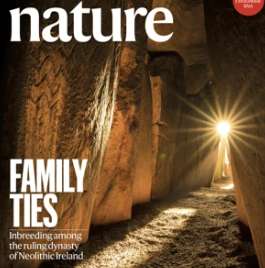 An eye opening new paper from Lara Cassidy et al. Dan Bradley is shining a light on the DNA of long dead inhabitants of Ireland. It has required mastery of the three key skills 1) meticulously polished, ultra-careful clean-room technique and 2) a whole other set of skills in computational sequence analysis and 3) appropriate choice of multivariate statistics. Since I last wrote about The Effective = 1st author on this paper  [prev] , she has applied for, and accepted, a lectureship in her once-and-future department. It's super nice to launch her "grown-up" career with the front cover of Nature [R]; like, no pressure for future delivery!

There's a lot to unpack in the paper and most of the technical details [at all levels: ancient DNA abstraction; sequencing and assembly of ancient genomes; statistical analysis of the data] will be beyond my pay-grade. It's beyond the Nature pay-wall as well, so inaccessible to Joe Public. You may therefore choose to jump to the accompanying News&Views Exec Summary by Alison Sheridan of Scots Nat Museum.

There are three neat findings.

1) The salacious one which has made the headlines is the fact that one of ancient corpses, buried in the centre of Newgrange, in the centre of Brú na Bóinne was the product of a brother-sister union. This is the only rational explanation for the fact that long tracts of his genome are identical on both copies of his chromosomes aka heterozygosity = 0:

But the singular of data is anecdote and, notwithstanding the later Pharaohs, there is no justification for saying, from this one case, that incest was an essential bonk in dynastic politics of Neolithic Ireland. You could equally well suggest that Down's syndrome [see para below] was running at 1-out-of-50 = 2% of the population in the same era; instead of 0.1% as now.

2) The second finding hinges on a neat analysis to determine the sex of the bone/tooth fragments from which the DNA was obtained. Modern high-throughput DNA sequencing makes a helluva lot of short 'reads' and then uses a big lump of a computer to line up the overlaps into 'contigs' which in turn can be mapped to The Human Genome to reveal their chromosomal location. The raw read-count for the X chromosome can be compared to read-count for the other chromosomes if the X reads are the same density then you have a XX female if X reads are ½ as dense as the rest then it's a boy. I don't know whether the data shouted out or if some bright spark decided to look but one of the ancient dead had 1.5x reads for Chromosome 21whish indicates trisomy 21 aka The Down's. That boy never grew up to adulthood, but nor was he smothered at birth; and he was buried in a place of honour.

3) The third extrapolatory finding is an analysis of the isotopes of nitrogen and carbon to infer whether there was meat in the diet. There are 2 stable isotopes of carbon: C12 makes of 99% of natural samples and C13 contributes the rest. C14, used in carbon dating, decays radioactively and is registered only as 'trace'. But that trace has a half-life of 5,730 years which is neatly in the range to calibrate the age of the samples under investigation. Likewise there are two stable nitrogen isotopes except that the minor species is even less common N14 makes of 99.4%  N15 makes up the rest. I'll have to take it on trust that [relatively] high N15 and low C13 indicates a high protein meat diet. The Dublin consortium are happy to associate this diet with high status, although I bet that there were poachers on the royal estates who ate nothing but beef or salmon like former day Irish wedding guests.

Bonus. 4) There's an interesting twist in the N&V. Dr Sheridan is a trad-trained archaeologist who is inclined to dismiss the Cassidy/Bradley best-guess DNA evidence that the incommming high-status agriculturalists, who occupied these elaborate tombs, came from Spain. " . . . the authors seem to fall into the trap of assuming that Ireland’s farmers had sailed up from Iberia — an argument for which there is no archaeological evidence. Instead, the archaeology points towards the Morbihan area of Brittany in northwest France . . .". But Sheridan is possibly clinging to the wreckage of what she learned in grad school and out in the field. DNA has the capacity to sweep all those pot-sherds and digs into the dustbin of history. When Des Higgins asserted that DNA said that whales were a rather specialised artiodactyl his hypothesis was greeted with derision but the deriders were wrong.

Finally, as everyone is talking incest, there will be snitty comments about Dr Cassidy, having done her stellar PhD under the supervision of Prof Bradley, has been parachuted into the newly available lectureship in Bradley's department. But as Freud said, "sometimes a cigar is just a cigar"; it's not useful to over-analyse things. Sometimes the very best is right in front of you and there's nothing to be gained by looking over her shoulder to sweep further and fare worse. There is luck involved, of course, but it's only in the timing which has yielded to proactive serendipity; Cassidy, like my mother, has made her own luck.

More women in Science.
Posted by BobTheScientist at 07:37