They all growed up

If you're new to The Blob, you may not even have met Dau.I and Dau.II (with whom I have half my genes in common) let alone twigged that they educated themselves at home and are now out and about in this dark world and wide [source]. They grew up with a cohort of youngsters who were similarly deprived of that school experience. None of them were struck in the back of the head with a spit-ball; none of them had their head flushed down the t'ilet in the boy's jacks; none of them were told they couldn't play soccer with the bigger chaps; none of them had to ask permission to go for a pee; none of them were told they were crap at maths or that girls couldn't become doctors. Although, to be fair, The Beloved had go Socratic on our 6 and 8 y.o. daughters to demonstrate that doctors were not exclusively male: "Now then: Doctor Farrell, whom we saw last month, is she a man?".

Meeting other parents at the school gates is, for most normal people, the last gasp at extending your social network which, apart from family, is mainly comprised of people you winnowed out of the crowd in school and college. We became founder members of HEN [the Home Education Network] in 1998, and that became our equivalent of the school gate crowd. Not all the parents were equally lovable and some of the kids (I blame the parents) were frankly bat-shit but the shared experience of educating children at home (not to mention rice-cakes, Birkenstocks, and floaty skirts) made us friends for life. We didn't meet up every M-F day in term-time but the shared experience - washing 100 dinner plates together, that time the tent collapsed, the night Bob set off the fire-alarm - made tight bonds.

In their mid-teen years, Lulu the mother of my Dau.I and Dau.II's Bestie, decided that the whole cohort could do with having their horizons broadened. Accordingly she organised a schedule of events, and called it Transition Year, for about 18 consecutive months that took a dozen or more HENnies to Arboretum, Belfast, Cork, Dublin . . . and through Youghal. We would have done the Zoo as well but were offended that the lions were insufficiently vegetarian. I was the other adult in the room for several of these adventures, so got to know those youngsters quite well. Everyone different, every one good, like sourdough bread. Now they're all grown up, have gotten and used the vote, have steered, and got an old man off his sofa, a couple of key social justice referendums through to Tá,

Back in the day, when we'd all get together, you may be sure that one of these youngsters had done something entirely creditable or manifested some amazing triumph of their talents. It made our little chicks look paltry because all they'd managed in the previous month was make cupcakes and clean out the chicken shed. It wasn't that the other parents were boasting or boosting. It took me a while to turn this on its end: a) if you have a month or more between meets then you're not going to share the boring bits; they will be effectively invisible while the prize-winning or life-saving events will dominate the mind b) the other families were mostly crap at cup-cakes and were amazed that one so young could be so talented with a wooden spoon c) it's not a competition, it just seems that way sometimes. Celebrating the ordinary became the path to contentment.

Monica O'Connor, [prev] another of the Transition Year Mams, has made good a promise to herself to interview that generation of home-educated kids, including her own, and find out what they've done since leaving home. She's got her self a youtube channel and is giving the were-kids the space to tell their stories. Whatever we felt about their achievements as teenagers, the Kids Done Good as 20-somethings [Quiz-time: spot the half-genes-in-common pair]: 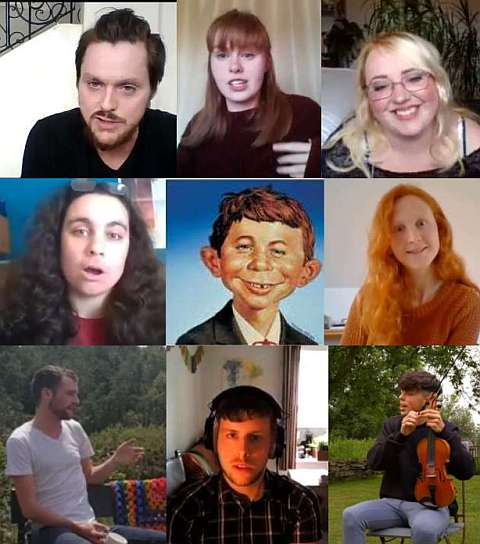 But the hell with "success", which is chimerical and ultimately empty; you could not meet a nicer group of people, they give me hope for the future. Akala says don't let no-one kill your imagination.
Posted by BobTheScientist at 07:30