This is how revolutions start. There is powerful symbolism when statues to The Great Men of one regime are brought literally down in the dust. If you wabnt some background music to this post your could do worse than Gordon Bok and Co harmonizing on How can I keep from singing? The album is my current wash-the-dishes-and-be-happier singalong. 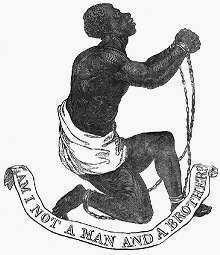 Appropriate Shagsper lines from JC. Brutus advocating to seize the day: "There is a tide in the affairs of men, Which taken at the flood, leads on the fortune; Omitted, all the voyage of their life is bound in shallows and in miseries. On such a full sea are we now afloat; And we must take the current when it serves, Or lose our ventures." It's appropriate because the metaphor is nautical and yesterday's news today is that the toppled statue commemorates Edward Colston a Bristol Merchant Venturer (1636-1721). Colston built a fortune on the slave trade and later did philanthropic works with his black lives don't matter much BLDMM money. Down through the years The Man likes a bloke who endows schools, hospitals and almshouses, so Colston's name is interwoven in the fabric of corporate Bristol.

Bristol also has one of the longest established black communities in England. This was largely under the radar of white middle class Bristol until the St Paul's Riots of April 1980 when the black youth pushed back instead of being pushed around. Shocked they were, the middle class press at the time - it's not helping anybody if these chaps damage property; if they have grievance there are proper channels. 1980 was the year of the 1st pIRA hunger strike in The Maze. You may make what parallels you want.

Lots of people, not just in USA, are out and about affirming that Black Lives Matter BLM. Dau.I was bearing witness outside the US Embassy in Dublin yesterday afternoon. Given that black lives are disproportionately snuffed by Covid-19, there is perhaps no better time than to take to the streets. Slavery is no longer acceptable (except in some saudi sandy places) in part because some shouty and assertive people made their abolitionist case in public again and again. It took more than 100 years from Colston's death to get the Abolition of Slavery Act 1833 through parliament but eventually the tide of political and public opinion came to a new normal that said no person could own another. The current, slightly tired from constant repetition, protests and marching acknowledges that abolishing slavery does not immediately abolish racism, ghettoisation, tokenism and casual brutality. 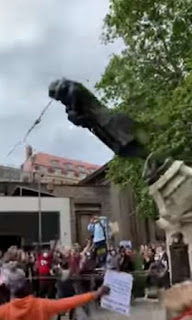 Whatevs. On Sunday afternoon  a BLM protest used a bit of leverage to topple Edward Colston from his plinth. Not content with that, they carried the old rogue to the nearest harbour wall and dumped hissonour into the drink >!Ploosh!< Much joyous ironic and witty commentary on twitter and elsewhere. “He tripped and fell. We all saw it.” "Edward Colston is a dangerous agitator who was approaching the crowd aggressively with rope". Priti Patel, the British Minister of The Interior was shocked at the disorderly and lawless behavior. And she is not alone, and is it my imagination that the tsk!ers seem so full of misery and truculence compared to the carnival delight of the ploosh!ers? That so many people condemn the Colston Affair just goes to show that property rights vs personal rights settled down to the same old same old after they put out the fires in St Paul's 40 years ago. Then again, you might try to count the black faces in the toppling crowd - you'll only need one hand. If everyone goes home thinking that was a good afternoon's work then everyone should think again. You haven't begun to work through the changes necessary in yourself, in the tax system, in education, in the economy . . . to achieve a fair and equable society.  In Ireland, we've freed the gays; got votes and personal uterine control for women; but we still allow Katie Taylor to assault another woman in public for money. And we still keep refugees in shamefully disempowering and wasteful Direct Provision for years.
Posted by BobTheScientist at 07:30