I'm off my food 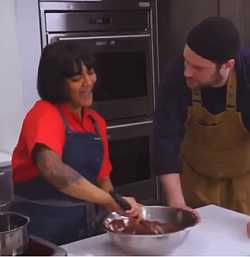 A tuthree weeks ago, Dau.II aka Cookie from Corcaigh drew my attention to a brilliant inspirational video about fermenting and cooking. I've tuned into the Bon Appétit Test Kitchen before because I bake and you never know what you might learn. But I'm not a groupie. Brad and Sohla make dosas does what it says on the tin, but with a bowlful of élan, expertise and experimentation all stirred together with a  sense of fun. Each player had a part, but it was clear who knew what was going on and who was learning [as in R]; so Sohla & Brad would be a better billing on the stars go first paradigm in the billboard industry. In science, there is a different convention: the Gaffer / PI / Money goes last-author, the effective/student goes first. In my Food Fermentation module next year, I'll make the students watch Sohla and Brad to force some reflection on allowable error / inaccuracy; if you can master that you have profound "Barbara McClintock" [her 118th birthday today!] understanding rather than reliably follow the protocol understanding.

I am very sorry to report, via Metafilter, that the cake batter really hit the fan >!fffrrrrpppp!< in the Bon Appétit Test Kitchen last week. The co-founder Adam Rapoport was discovered, in the near infinity of embarrassing back-story that is the interweb, to have been at a fancy dress party dressed as a stereotypical Puerto Rican . . . in 2004. This hilarious gag is known as brownface and has exactly the same toxic branding as blackface which has meant that, among much else, much everywhere, Zwart Piet can no longer bring cookies to kiddies at Sintaklaas.  In the five alarm fire that is Black Lives Matter this month, that error of judgement requires that the perp falls on his sword. I say "this month" because We the Patriarchy have sadly, shamefully, been here before and wrung our hands and then got back to normal life; rather than wringing necks and implementing to some permanent changes to our collective own hearts and minds.

Aside: I recently coughed up $5 fro lifetime membership of the Mefi community hoping to give back a little after lurking there for a decade because it is such a great source of copy and commentary.  I had this to say on the BonAp farago: I only came across Sohla a couple of weeks ago in Brad & Sohla make Dosas . She is brilliant; a real are we going to measure or are we going to cook cook. She is what we treasure in science: a good pair of hands - someone whose understanding of what's going on down there (on the lab bench or in the oven) doesn't need continual input or instructions from a recipe / protocol. Respect!

Q. Who cares, when there's a pandemic on, what sketchy prank some white dude did 16 years ago?
A. Nobody, because it's optics. But Sohla al-Waylly, pointed out that, actually, the racism in Bon Appétit is not only one boss-man and the past is a different country. It was au contraire, in Sohla's experience,  systemic and pervasive and directly affecting her sense of self-esteem and take-home pay. What rubbed salt in the wound was that the management had recognised that there was A Problem in BonAp: the overwhelmingly white caste of the leading front-of-camera cooks looked bad. And the response has been to try to make it l👁👁k better without actually undertaking to make it really better. Among other shit, there was a cunning plan that dusky Sohla was given more time in front of camera while still expecting her to do the tasks she'd been hired for  . . . and kept on the same barely scraping salary. She and a raft of other young people were effectively in the intern trap where they'd suck it up: low-or-no pay; casual disrespect;  making the effin' coffee . . . just to be in the same room, with half a knee under the Big Time table. The business model is based on the threat/promise that 100 hungry young kids were out there who'd gladly take your place.

And WHEN Sohla spoke up and put out her almost-there-but-always-the-bridesmaid story [and her career on the line!] THEN everyone in BonAp suddenly woke up and joined the chorus of solidarity and support. Because up until that exposure, the king was fully clothed for all the white folks in the kitchen: they were all so driven by their own eyes-front-and-upwards trajectory of ambition that everyone else, especially those further down the pecking order was invisible. With only a few places in the winner-take-all enclosure, solidarity ceded second place to MeFirst and the American dream. Very few people come out well from this sorry tale, except perhaps Sohla al-Wonderwoman. TwitterFans. And rather than just batter the BonAp pancake; we could with advantage reflect on [every?] other industries with the BBC: where all-white companies are blowing hard about BLM while sadly neglecting to hire any actual black talent.
Posted by BobTheScientist at 07:44