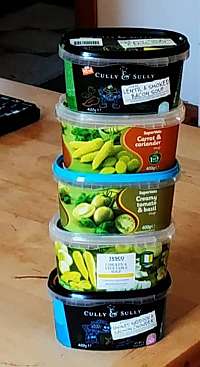 This year I've been quite active in the garden, perhaps because normal life was a bit off the rails. It's been nice to get something for nothing even if that's limited to 3 random Spring Greens - ramsons, parsley, chives - which happened to be actively growing when lockdown slammed so many doors shut. But when you're sprinkling chopped parsley on the porridge then something must be done. In consultation with my window-sill gardening consultant aka Dau.II, I'm giving sprouts a go. When we were late-arrival hippies in the 1970s we roasted dandelion roots for "coffee"; The Beloved made her own yoghurt (and koumiss); I brewed beer in a bucket; and I'm pretty sure we sprouted mung beans Vigna radiata. Didn't have any mung dal in 2o2o, so I went to the Brexit bunker to see what we did have. Not a lot of variety there I'm ashamed to say. Of the 16 species [and hundreds of varieties] of common eaten legumes, I could only find 2: pinto beans - a variety of Phaseolus  vulgaris and Lens culinaris "lentilles vertes" and "green speckled lentils". By way of experiment, I weighed precise quantities each variety [including two batches of speckled with different sell-by dates. For containers we have a large collection of fashion accessory soups from Cully&Sully [original and best], Supervalu and Tesco. These are twice virtuous because a) I didn't buy the product myself - how hard can it be to make soup? b) they have become our standard not-tupperware fridge container and have been reused multiple times - despite the shameful business model of use once on the way to landfill. - wot are we like, like?? These containers are certified for food-use so must have less BPA than can start a small man lactating. It is comment on our times that we have more varieties of once-off soup than we have of plain leguminous seeds that could be the backbone of an infinite variety of soups - every one delicious and every one different and none of the requiring more than a handful of ingredients including the water.

Mais revenons nous a nos lentilles germées. The containers hold water but not in the right way, so I begged a very old bath-towel from laundry and cut ovals of towelling to fit in the bottom of them. Towelling strikes me as being an excellent surface for sprouting beans: it is designed to be water-retaining but the little thrums in the cloth keep the sprouts from immersion. But that's experimental; we'll see how they serve. Leave the lids off! to circulate air and keep the fungus at bay.
Here's where we started:
What? Fenugreek? That's a spice! Indeed so, alert reader, but Trigonella foenum-graecum  = methi, fenugreek, is assuredly a legume, albeit a smelly one. The fenigreek towel was bright yellow after 2 days of contact. It is also loaded with plant secondary compounds like coumarins which tend, like BPA, to be hormone analogues. Fenugreek has been used to start uterine contractions and to stimulate milk production in breast-feeding mothers (although evidence is weak). If my moobs start weeping we'll have a publishable result. 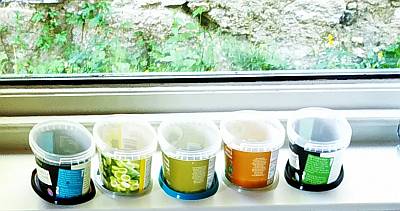 Update: I am amazed, and delirah, to report that all of replicates are beginning to sprout with max shoot length ~8mm. About 50 hours from first wetting.