The palaeontologist known as Georges Cuvier was born in 1769 and christened Jean Léopold Nicolas Frédéric Cuvier.  His younger brother Georges-Frédéric Cuvier was known as Frédéric Cuvier, he was also a zoologist but not so well known nowadays despite being head keeper of the menagerie at the Muséum d'Histoire Naturelle in Paris. J.L.N.F "Georges" Curvier was the father of comparative anatomy. He is famous for his statement of universal connectivity "À la vue d'un os, d'un seul morceau d'os, je reconnais et reconstruis la partie de l'ensemble dont il provient". Conan "Sherlock Holmes" Doyle reflected on this "As Cuvier could correctly describe a whole animal by the contemplation of a single bone, so the observer who has thoroughly understood one link in a series of incidents should be able to accurately state all the other ones, both before and after". What are the consequences of this knowledge? 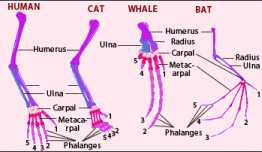 The humerus of a whale or a hippo is chunkier than the humerus of a bat - obviously in absolute terms but also relatively, that means that the whale ribs are going to be more massive as well.  Actually the hippos rib cage is relatively stronger than a whale's because the latter passes of some of the function of ribs (supporting the wobbly bits in the thorax) onto the surrounding water. You can infer a lot about the mating structure in a species if the males are bigger than females or if they have massive horns; you know what a fossil ate from the shape of its teeth, you know if it has seven cervical vertebrae it is likely a mammal. A single grinding molar, a single elongated neck bone and one femur will tell you that the animal ate leaves not rodents.

Cuvier sat in his majesty in his office in the Jardins des Plantes in Paris much is Darwin lay on his chaise-longue in Downe House farting and reading and dictating letters to a world-wide network of collaborators.  The Frenchman described and named an ark of miscellaneous creatures, so where did he get the primary data - the bones and skins? From among others, Mary Anning [below R with the distinctive headland of Golden Cap in the background], a poor but determined woman from Lyme Regis on the Jurassic Coast of Dorset in Southern England. 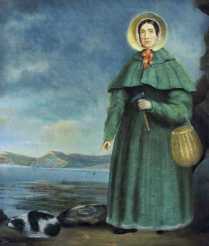 Mary Anning was born 30 years after Le Grand Cuvier on 21 May 1799. Her father Richard Anning was a cabinet-maker who died of TB when Mary was 11.  Only herself and her brother Joseph survived to adulthood, another 8 siblings fell by the wayside from the illnesses and accidents that used to scythe through the population in those days before reliable clean water and effective vaccination.  Richard used to display "curiosities" in the window of his show as a way of catching the passing trade.  These were heavy on fossils which washed out of the local cliffs, particularly after storms. Shen their father died, Mary and Joseph continued to earn a few shillings finding fossils along the sea-shore and selling them to collectors.  Their most famous contribution to palaeontology was to recover, over two successive seasons, the complete skeleton of an Ichtyosaurus communis, a dolphin-sized aquatic dinosaur which they sold on for £23: about a year's wages for an agricultural labourer in those days.  But that didn't last long when the family couldn't keep a pig and grow their own spuds. Solvency came when another professional collector Colonel Birch sold part of his collection to raise £400 for the Annings.   In 1824, Anning found the skeleton of a Plesiosaurus dolichodeirus, another aquatic dinosaur with a very different anatomy - having a tiny head at the end of  an immensely long neck. That fetched £100 and drew the, initally skeptical, attention of Georges Cuvier. Her third claim to fame was to identify the fine partial skeleton of Pterodactylus macronyx a flying dinosaur. These three species are familiar to any child who has a Big Book of Dinosaurs and any one of which would have secured lasting fame to the discoverer.

I think her insight and imagination are more tellingly revealed by her explanation of bezoar stones which were spheroidical masses believed by medieval doctors to be antidotes to all poisons. Anning found a number of them in situ in the abdominal cavity of the marine fossils that she was preparing for pay or display.  The juxtaposition was too frequent to be coincidental and she concluded that they must be fossilised turds.  One of her blokey collaborators William Buckland wrote up her conclusions, citing her, and called them coprolites. The name and the explanation have stuck to this day. Bezoars are still being exploited nowadays "by practicing occultists, pagans, wiccans, shamans; including New Age, magick, and Hoodoo practitioners" but few of them refer back to Anning's theory of intestinal origins.  Buckland, on the contrary, exploited coprolites for science.  Just as Cuvier could reconstruct the entire animal from a single bone, Buckland had a shot at explaining an entire ecosystem, as in who ate what, from a systematic study of the make-up of bezoars.  Nifty!

The list of Anning's correspondents and visitors reads like the pantheon of early 19thC geology and palaeontology: Charles Lyell, Darwin's mentor, Adam Sedgewick, Roderick Murchison all benefitted from her material and her own interpretations of what they indicated.  Louis Agassiz crossed the Atlantic especially to solicit her help to locate key fossil fish from the era whose rocks are exposed on the Dorset coast. It is clear that Anning was regarded as a "curiosity" herself, contemporary opinion suggested that her formidable intellect and diligent pursuit of scientific evidence were the result of being struck by lightning when a child. Several of the men who benefitted from her knowledge plagiarised her work and made money from its publication. It is striking how often collectors would pay Anning £X and sell the material on for £2X shortly there after, like rather aristocratic fences - they had better connexions than she did and had no compunction about profitting thereby. 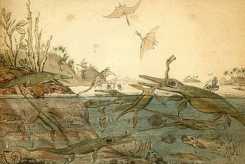 An exception to this exploitation was Henry de la Beche, who had known Anning since they were teenage friends tearing into the cliffs and sifting through the debris after Winter landslips. It was an unlikely pairing: she was only a carpenter's daughter whereas he was independently wealthy and could afford to live on his money. He later became the Director of the Geological Survey of Great Britain. In 1830, he painted Duria Antiquior [L] an extraordinarily busy and crowded imagining of what it was like in the shallow seas of 180mya.  It was later made into a lithograph, prints of which were sold and the profits donated to his friend in Lyme Regis.  And what about the dog?  Mary Anning had a dog called Tray which used to accompany her when she was out in the weather collecting. He was almost as important a tool as the geological hammer and the collecting basket which are also shown in her portrait above.  She trained him to sit next to interesting finds while she trudged back home to bring another basket . . . or a wheel-barrow?: some of her finds were far to heavy to lift.  You could imagine never finding the same place again against the featureless length of the beach.  The dog was crushed by an unexpected fall of cliff-face which almost swept Mary Anning to oblivion as well.  She didn't die in the field, she died in agony from breast cancer at the age of 47. She chugged down a lot of laudanum to deaden the pain and the local gossips were happy to bitch this into "she took to the dhrink and died".  The cliffs are notoriously unstable and a young woman was killed by a fall as recently as 2012.

You can go fossilling with a local expert this morning at 0900hrs and indeed most mornings of the month.  Indeed I've been out along the Dorset coast myself washing a world of invertebrate fossils out of grey clay boulders that litter the beach.  I wouldn't have Mary Anning's patience to preserve and process anything substantial.  She featured 10 days ago on the Guardian as one of 10 unsung women of science. Hank Green summarises her whole life in 5 minutes in his characteristically shrieky babble.

Posted by BobTheScientist at 06:41