What's DNA to him?

What makes a family? It's partly about genes-in-common but it's much more about shared experience. After all IF you're going to claim that a gay couple with an adopted kid are not a family because none of them have a recent common ancestor THEN you may leave The Blob now. Even if they don't explicitly recall that time Mam, two sherries down, dropped Christmas turkey on the kitchen floor; they will build up their own version of the family's shared experience. In families, we train each other up to respond in particular and peculiar ways to internal and external events and thereby become a more cohesive unit. Even if those internal events are horribly dark, they shape the participants so that they look and feel more like each other than they do to outsiders.

When our kids were small, I'd set up an age-appropriate Treasure Hunt for Easter Sunday morning. Looking back on some of the clues, I marvel at my concept of age-appropriate because I seem to have had absurdly high expectations for what a 9 and 7 y.o. were able for. Then again, then again; it was usual for them to rattle through the puzzles quick enough to satisfy their chocolate acquisition drives, with only minimal supplementary clues from me. I suppose I was exercising my educational philosophy of pushing them a little bit more than they might have been initially comfortable with. I reckon a large part of it was that continued practice tuned them into my ways of seeing so it became steadily easier to read me like a book. 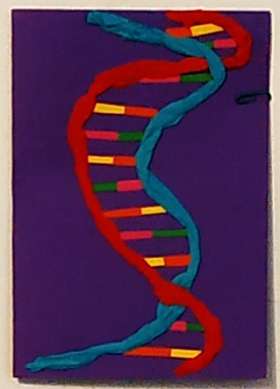 That's all by way of scene-setting for the bday card I received last week from Gdau.I, who is 8 going on 800. Never underestimate how much knowledge pre-teen kids are packing away. The classics quiz I sent her back-at-you was in response to one she set her parents and grandparents. The grandfathers scored 3/10 and 2/10 respectively while the parents mustered 0/10 and 1/10. Adult honour was marginally restored when Dau.I the Reader clocked up 7/10. I won the Junior Scripture Prize aged 11 because I read, with care and attention, 6 chapters of the KJV of the bible every week for about 24 months.  The card [L] is clearly a cartoon of the iconic DNA double helix; but Gdau.I had helpfully included a key on the reverse. Adenine - Guanine - Thymine - Cytosine . . . well, kidder, that's life, Jim, but not as we know it. Because although you have been careful to maintain consistency in the pairings, all the life on this planet pairs A with T rather than A with C. But that's okay because it gives more options on what the message encoded in the picture might be.

Q. What's DNA to me?
A. It must be a clue to a puzzle!
Because I refused to accept that an 8 y.o. would stick just random base-pairs in her double helix. As you shd know, DNA is read off in triplets = codons using a particular [almost] Universal Genetic Code, but it's not obvious from picture what is the direction of transcription and translation. So there are 4 different ways in which the DNA bases can read: blue up; blue down; red up; red down. There are also one or two points of ambiguity where the turns of the helical backbones obscure the base-pairs between them. But here's the data transliterated:
CG?TATAGCTA?TC
AT?GCGCTAGC?GA
CT?ATCGATAT?GC
AG?CGATCGCG?TA
It is obvious, with a bit of help from ExPaSy's translate tool which is the information-containing strand and its direction (the others are random noise):
CTaATCGATATcGC. where I have interpolated (a c) for the backbone-obscured bases
L  I  D  I  A 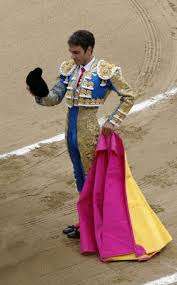 Lidia? It's a message! From one generation to its ancestor!! But what can it mean? there are a number of possibilities: