When duty whispers low, "thou must", the ou'fella replies "Can Do". The academic year is winding down with meetings of various kinds: deciding on grades, planning for an uncertain future and doing a certain amount of post-mortem on what went wrong (and right!) in the surprise-storm of Coronarama & Lockdown. Last week I was essentially missing in action on one of these Zooms because round about 1030 the neighbourhood wakes up and starts to stream video, upload photos and play violent on-line games. That's just about when meetings at Th EInstititute are getting going. Today I am going into The [real]Institute because this morning's meeting is accept-no-substitute for poor old Bob. For yesterday's zooming, not so much; accordingly I stopped at home hoping that the connexion would be alright-on-the-night. Well it wasn't, about 20 minutes before the off, the interweb turned to glue. I tried switching-it-off-and-on-again for the browser, the laptop and the modem but we were still flat-lining; and I was about to call it quits and have a restorative cuppa. THEN a voice muttered in my deep conscientious service mind "Trust in the plastic walls" was the Delphic message.

Which I interpreted as switch everything off, bag it and schlep us all up the steps to the polytunnel in the garden behind the house. Well, it worked a treat! I am probably not winning much height but it must be easier for the rays the rays of our wireless "broad"band to get through 200 μm of polythene than through 500mm of granite rubble or the double glazing. 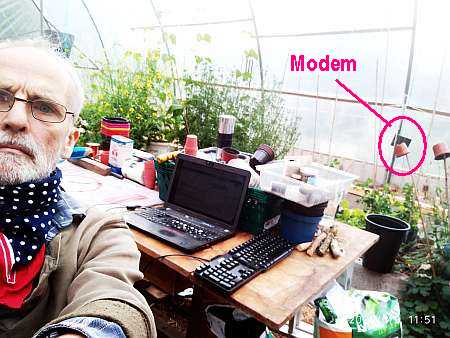 I followed noise&bandwidth protocol and switched off my webcam. Which is tactful because it would be clear to my colleagues that, by a country mile, I have the biggest home office at nearly 150sq.m. In contrast, my work office is just a tad over 15sq.m and I share it with three other desks occupied by 5 other people. One of the hot-deskees, a part-time physicist who teaches only on Fridays, stopped bothering to visit after three weeks and now goes straight from the car-park to the lab and then home-again. This picture also shows that I have a whole drawer of different coloured bandito-bandannas . . . well at least two. As well as being capacious, my office is really well equipped: trowels, forks, knives; bamboos and flower pots; herring-barrels and buckets; sieved and unsieved compost; beans, peas, bees.

Better to light a candle than rail against the darkness
[not original to Eleanor Roosevelt]
Posted by BobTheScientist at 07:40