At The Institute, I affect shock-and-amazement when young scientists seem to have no idea how many chromosomes they have in each of the 100 trillion cells in their body. Does nobody else teach them the fundamentals?  Is it not part of the curriculum in Irish secondary schools?  I shouldn't be too hard on them because, when I was born, everyone was certain-sure that we humans had the same number as the great apes: chimpanzees (Pan troglodytes), bonobos (Pan paniscus) and gorillas (Gorilla gorilla) at 2N = 48. But in December 1955, Joe Hin Tjio, an Indonesian cytogeneticist working with Albert Levan in at University of Lund in Sweden, invented a new technique for puffing up cells so that the individual chromosomes could be more easily separated, identified and counted.  He made out only 2N=46 chromosomes and published his revolutionary finding in record time - it was published (in print, on paper, having been peer-reviewed) in a record breaking 35 days.  Everyone now agrees that 46 is the normal number for humans and almost all of us have that count.  But for 50 years before that everyone was wrong. I should, and do, cut our poor students some slack if they don't know what the correct number is either.

I should, for folk who are legitimately a bit weak-at-the-ould-genetics, explain this 2N= notation. All mammals [there are some Muntiacus muntjak exceptions] have so many pairs of chromosomes, one lot inherited from their mother and a matching set from their father.  The single "haploid" set is what travels briefly as sperm or egg before the full "diploid" set is formed at fertilisation.  Another way of describing our chromosome content is to count off 22 pairs of regular "autosomes" but give special place to the last two: XX for girls and XY for boys.  For convenience and to ensure we're all talking about the same thing, we number the chromosomes from 1 (longest) to 22 (shortest). The Y chromosome is tiny but the X is one of our biggest, so these sex-chromosomes don't fit the pattern and aren't included in the numbered list.  Actually <pedantry alert> chromosome 21 is shorter than 22 but the early cytogeneticists looked at the two teeny similar sized blobs down the microscope and made a mistake about which was bigger. The differences between our chromosomes and those of our nearest relatives the apes are numerous but include the fact that our chromosome 2 is represented by two half-pint chromosomes in the apes [see L and above: a single human chr.2 on the left with the equivalent pairs for chimp, gorilla and orang].  Thus part of the process of becoming human involved clagging together two chromosomes in a massive genetic engineering experiment that seems to have worked. 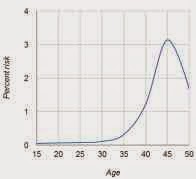 Most of us know a bit about chromosome 21 because it is responsible for The Down's aka Down Syndrome, DS or trisomy-21 if there is an extra copy of this the shortest chromosome. Over all, about 1 in every 1000 live births is Down Syndrome with the frequency increasing steeply [your last pregnancy before menopause is about 30x more likely to have a Down's outcome than when you were in your early 20s] among older parents especially older mothers.  With the increasing age of mothers in the Western world, you might think that the frequency of this syndrome would be increasing but in fact it was 2x as common 50-60 years ago.  The discrepancy is probably best explained by prenatal diagnosis and selective abortion. Not in Ireland of course, we don't allow that sort of sin here; we make people ship off to England to get sorted.  Down's is interesting also for the insight it gives into the location of genes that cause a variety of other diseases and syndromes. These include congenital heart defects (50% of all DS), while leukaemia is 30x more common in DS than in the general population and more or less 100% of DS develop Alzheimer symptoms over the age of 35.  About half of DS show a single fold/crease in the skin of the palm where the 'heart' line and the 'head' line fuse into a single crease.  This used to be called a simian crease because our great ape cousins are meant to have this arrangement.  But about 10% of the reg'lar human population also have a simian crease on one or both palms.  Presumably genes associated with Alzheimer's are located on chromosome 21 and having extra copies disrupts some delicate balance.

Other trisomies are found, but their prognosis is much worse than for Down's. Trisomy 18 aka Edward's syndrome occurs at a rate of 1:6000 live births and has an average survival time after birth of less that 2 weeks. 80% of Trisomy 13 or Patau syndrome die before their 1st birthday and are even rarer at birth: 1:10,000 to 1:20,000. When I was learning genetics in college 40 years ago, we had a whole course on this sort of thing; there was much less to cover in the subject in those innocent pre-genome days and the course was still four years long. You might ask, as I did in 1975, why these three anomalies in the count of chromosomes survive to term while others don't: why do we 'never' see children with trisomy 22, 20, 19, 17, 16, 15, 14 ?  It turns out that mere length of the chromosome is a rather crude measure of their functionality.  A better one might be counting the number genes - because some chromosomes are much more gene-dense than others. In terms of (gene count) rather than length, the shortest chromosomes are . . . Y (45); 21 (225); 18 (268); 13 (318).  When I was being paid to analyse the human genome just after if was delivered into the public domain we noted wildly different gene-densities in similarly sized chr19 (24 genes/Mb) and chr18 (4 genes/Mb), and didn't know quite what to do with that information. Now I appreciate one of the consequences of the anomaly and see how the human genome sequencing project shines a handy lamp on the crude tools we had back when I was a student of genetics.
Posted by BobTheScientist at 06:33