A couple of weeks ago, my KK correspondent G sent me a story in The Jerusalem Post about ABO blood groups and differential response to Covid-19. I was in the midst of a Covid moratorium so didn't follow it up. I did pause to reflect on why G was scanning the Jerusalem Post: surely if you live in the SunnySouthEast everything you need to know can be met by perusing the Munster Express?

The JPost is referring to a study in NEJM which has taken a blood sample from ~1600 people in the Spanish and Italian epicentres of early Covid-19 meltdown. At some stage in every patient's treatment bloods were taken and while they were routine checking for creatinine, serum albumin and alkaline phosphatase they also had to check ABO blood groups in case anyone needed a transfusion. I've written about ABO blood groups before in the context of priority - paternity - geography - history - disease association.  But my [slightly delayed] response was ooooo data and I scooted off to the NEJM to download Supplementary Appendix 8 which contains the raw counts and %s for ABO in various geographic and medical-severity bins. The first thing to note is that Spain and Italy are not the same population wrt ABO blood groups and so, strictly speaking, the data from the two agglomerations should not be pooled. This fact was brought up to the top of my 'mind' because one of the tables in Appendix 8 has gathered a bunch of Basque ABO data as a control. Whoa, lads! The Basques are the Martians of Europe, even more so than the Magyars: their language is not proto-Indo-European PIE and their blood groups look like a sore thumb (mostly Rhesus diffs it must be said). As a side-swipe, note the different colours on the map [R] for Lombardy and NE Spain where most of the Covid-sick in the study came from. 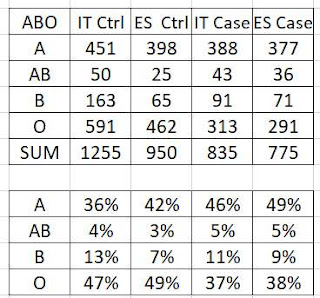 Which tells us a) that there are a lot of data here b) that the number of hospitalised cases is about equal in the two countries (although quite uneven in among the several participating hospitals) c) that sick people include more GpA people and fewer GpO people than you'd expect if they were a random selection of the population based on the controls. Because the paper didn't do this, I checked for ABO heterogeneity between total ES controls and total IT controls with a simple Chi.Sq test. The base-line differences are highly significant (Chi.Sq = 27; df 3; p < 0.001) with their being more A alleles in Spain and fewer B. Which is grand because we effectively have two different parallel experiments which both reveal the same skew: you are about 50% more likely to finish up on a ventilator if you are blood group A and a third less likely to do so if you are Group O. This is the odds ratio OR: [explained] (a/c)/(b/d)  = 1.54 for Italy (it's 1.31 for Spain) where
You can do similar calcs with O vs ~O / sick vs well. What are you / me / we meant to do with that information? My correspondent G was jubilant that she was Group O. I'm Group A but I'm not really concerned although the odds look stacked against us the (elite) A-team.  There are far more people with Group A who are uninfected, asymptomatic or who have copped a dose and had mild to moderate symptoms because that's the ~80% in the Covid-19 world. The 20% who get real sick and the 1% who die (or have such a crappy experience that death is wished for) are disproportionately A, yes, but they are far more obese, diabetic, have cardio-vascular issues or are over 80 years old. I am none of those.  Ed Cara at Gizmodo has covered the story with extra input from front-liners “It’s a big headline, but scientifically, if one of my colleagues in the emergency room were to call me up and say, ‘Hey, we were about to intubate somebody, but then we noticed their blood group was O. Should we still do it?’ I’d be like, ‘You’re crazy. You’re just absolutely crazy,’” Gehrie said.

And remember that it takes two to tango: before you get a chance of a go on a ventilator, you have to first catch SARS-CoVi2. Me? I rarely go shopping; I wear a mask in LIDL; I wash my hands afterwards; I don't suck face with young wans in discos; etc etc. I don't think G should take fewer risks than me because her red blood cells each carry a really small titanium Captain America shield.

It's a bit like my analysis is Statins. They have demonstrable, statistically significant effect on lowering cholesterol and so will prevent heart attacks. But the number needed to treat NNT for statins is more than 100! 100 people have to be taking statins for 1 to not have a coronary infarction. Statins have wild side-effects in some people and will cost you (or the beneficent HSE) a chunk of money. You'd be better off changing your diet, getting off your couch, de-stressing and being more socially engaged. But these take effort, statins just need a small glass of water.
On Covid-19, you can't change your blood group but you'd be spiffin' bonkers to think
I R O, I R OK, I can share spittle with randomers