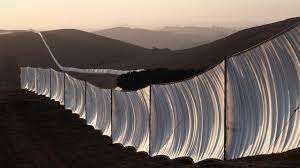 Jeanne-Claude Denat de Guillebon and Christo Vladimirov Javacheff were both born on 13th June 1935 but a world apart in Morocco and Bulgaria. They met in Paris in their early 20s and were "an item" for more than 50 years. She died in 2009 and he's gone to join her since the last of May this year.

Do you know what Art is for?
Answers on a postcard, please because I'm damned if I know.
Many scientists will have a much clearer idea of what science is for; but they will be deluded in their beliefs even if, maybe especially if, these believers point to technological changes that have been wrought by science, Every good thing that science has brought down upon us could be reconsidered from a wider perspective. Cars are dead handy except for the dead cyclists and pedestrians. Ryanair is mighty convenient for people and and a scourge for all Earth cohabiting unpeople. Vaccines & the green revolution, have led to a world despoiled by wheat and corn fields to feed us all . . . and our goddamned cattle. Social media and the internet allows us to store uncountable numbers of really terrible photos on server farms somewhere. Those servers require 2,500 TWh of electricity each year [10% of the total!]. Server-farm consumption is conveniently close to 100x the electricity bill for Ireland Inc.  That's a crappy bargain from science and technology IMO. Whoa! Bob; calm down man could you get back on the Arts side?

Jeanne-Claude & Christo may, or may not, have had notions of what Art is for. But they had very big ideas about what Art is. It wasn't, for them, painting a well-fed lady with an enigmatic smile. J-C&C came over my horizon in 1976 when they built Running Fence [at top, catching a stiff breeeze] across 25 miles 40 km of Marin and Sonoma counties in California. The "fence" was composed of 2000+ bright white nylon curtains 5.5m tall suspended from a very long curtain wire held aloft by 10cm ⌀ tubular steel posts. It was a mighty breath-taking project that was 4 years in planning, negotiation & making and was taken down after precisely 2 weeks. The local landowners and ranchers got to keep the posts and panels. Nothing was left in place  >!poof!< all gone, done and dusted. The Art was in the process - and the community formed to make it happen - not The Thing in Itself [I Kant stand it]. I guess, like lumps of the Berlin Wall, there are sections of Fence in attics and barns across the region even now. [microdocumentary]. Did somebody mention Berlin? Christo & Jeanne-Claude also wrapped the Reichstag in 1972 [R]