I use Google Translate A Lot. Since Christmas, I have needed wanted to say Happy Birthday; Good Luck; Onwards!; Stay safe, stay sane . . . in Russian, Telugu, Portuguese and Italian. All of that to communicate with residents in Ireland. It's the most wonderful element of change since the Celtic Tiger started roaring. Free the gays; Wikipedia; GPS photos; Google maps; the NCT; these are all very well but, for me it's the coming and staying and contributing and sharing of the New Irish. There are 182 different ways of describing the world; 182 different ways of thinking to help solve the problems of our uncertain future. Caitlin Moran maintains that excluding {BLTs | Blacks | travellers | women | teens} from political debate makes countries stupider. The flip side of that is multiple Ways of Seeing (and dialogue among the differing worldviews) make a creative solution more likely.

The Irish language has a special privileged place in the politics of the country. It is important in the maintenance of the myth of Irish exceptionalism. I despise exceptionalism but I love the idea that people work diligently bringing the language of Cúchulainn and Toirdhealbhach Ó Cearbhalláin into the 21st Century. Now we need bithfhaisnéisíocht, tointeáil spáis and fón póca. Nevertheless more people speak Polish at home in Ireland than Irish. Here are the languages spoken by more than 10,000 people resident in the Republic.
Did you ever pause to think how Google Translate does it's work. Because it's certainly not because there is someone on call 24/7 who bilingual in Pashto and Slovak ready to give the word for torque-wrench in both tongues.The EU was a rich source for GT because of all the documents and regulations about the size of apples and the quality of water are essentially parallel texts in the 24 Official Languages of the EU: Bulgarian; Croatian; Czech; Danish; Dutch; English; Estonian; Finnish; French; German; Greek; Hungarian; Irish; Italian; Latvian; Lithuanian; Maltese; Polish; Portuguese; Romanian; Slovak; Slovenian; Spanish; Swedish. That's so political: millions of €€€s are spent every year so that everything is rendered into Maltese and Irish but Catalan speakers have to struggle through with French or Castillian. 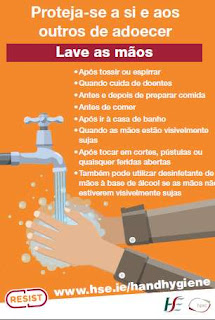 It's not often I get excited by public service announcements from The Man. But this announcement from the HSE appeared in my Inbox last week.
For those whose first language is neither English nor Irish, we have translated public health information into 24 other languages. These include Albanian, Arabic, Bulgarian, Simplified Chinese, Czech, Farsi, French, Georgian, German, Greek, Hungarian, Italian, Kurdish, Latvian, Lithuanian, Pashto, Polish, Portuguese, Romanian, Russian, Slovak, Spanish, Urdu and Yoruba. We are also working on developing resources in Somali and Eritrean.
How many copies of these will be printed in Albanian and Urdu? And should that paper be better purposed to make more tissues?  It is a shame that my love of linguistic diversity is not matched by much facility in the area. Last weekend I was riffing on how Latin was a painfully closed book to me as a child. Later, because I was working and walking in the relevant country, I got some fluency in  Nederlands  and Portugais but only through hard work. I could at one time read the newspaper in either of those languages (and french) but I'd need pictures now. Here's a sentence from the Portuguese advice on hand-washing [R]. Após tocar em cortes, pústulas ou quaisquer feridas abertas. I saw "tocar" = touch and "aberta" = open and decided it must be about fomites: door handles, counter-tops ["cortes"] and light-switches ["pústulas"]. Nope! It is urging you to wash hands "After touching cuts, blisters and open wounds" which sounds a lot more like Ebola than Corona to me. My Portuguese clearly needs polishing: I could only understand half the words in that short sentence.
Posted by BobTheScientist at 07:18