Loose Ends Department. I was lamenting the fact that, in a very short space of time last month, a couple of song-thrushes Smólach ceoil Turdus philomela whacked into our windows stunning themselves to death. Thrushes are doing quite well hereabouts, increasing rather than diminishing in numbers. Nevertheless, we'd rather make it harder form song-birds to kill themselves, even if they thereby provide food for ants.  But inertia kicked in and nothing was done to stop the carnage . . . until on a single day in the first week of June 3 more thrushes, two juveniles, did for themselves against the glass. Although I had cogitated about dangling an old CD or two in front of the window to trigger a this-ain't-right reflex in approaching birds. 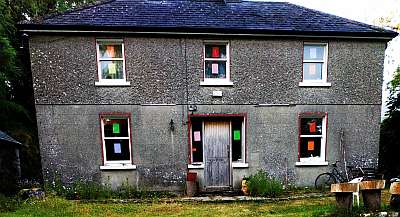 In response to that post, my correspondent P in Boston shared her trick of covering the killer-windows with post-its. Not having a lot of them about her desk, the Beloved broken open a package of primary coloured cartridge paper and brightened up the gloomy facade of our home. A couple of days later, she was in funds, in town and in aviacare and bought a packet of offensively bright post-its. It is not true that you can't see out of the window; you just have to weave and jink a bit to see what's going on outside
Posted by BobTheScientist at 07:20