In my latter years working at The Institute, as deficits of age accumulated, I would start the year in each class by explaining that, if I cut them in the canteen, it wasn't because I was too grand to acknowledge their lowly existence but rather because my eyesight was too poor to recognise them as mine. And I hoped they would have enough empathy to appreciate that it would be kinda freaky if other students were being greeted effusively by a random silverback. That, and an explicit <shows rainbow wrist-band> affirmation that I was down with the gays. There was a subtext here that I wouldn't tolerate anyone getting slagged on my watch for: coming from Wexford; having facial hardware; being super shy; playing, or not playing, sports; let alone for having: a great tan, XX chromosomes, or any sort of BLT identity.

I also felt very strongly that it was okay if I didn't know all the answers. Indeed that it was a better educational experience because I didn't know everything: my ignorance put more pressure on the students to find out for themselves. But I surely wouldn't have had as much confidence in that theory when I was starting out as a graduate student teaching lab sections when I was only a few of years older that the average UG student in class. And if I was a young woman, or a young black woman, or trans, how much harder would it be to be wrong or to not know the answer?  That being said, it's also really important to convey a Joy of Science enthusiasm for the tasks to be covered; even if those tasks were intrinsically not-the-cutting-edge "discoveries" of, say, Hooke's [1676!] Law about strain, stress and springs. 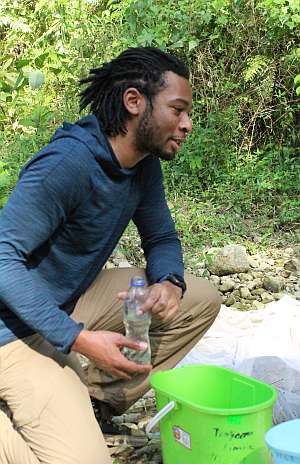 That was all brought into focus for me by a nice little confessional essay in Science The pressure to assimilate about dress, comportment and being your true self by 'Trai Spikes [R about to get all wet in the field], a black student running ecology labs in Oklahoma U. Along the way growing up, he'd bought into Polonius' advice about apparel oft proclaims the man: that you get more respeck if you dress up. You'd better be stonking bri'nt if you turn up for a job interview in a tee-shirt and trainers; while an ironed shirt and pressed trousers will show who's in charge of the Biology 101 labs. But then young Trai was brought to realise that he was being viewed as a sell-out to The Man by his minority students. And he found that being his true self made him happier in his own skin and that allowed his passion for science to radiate around the room and inspire another generation of young scientists. Double Triple Win!

I have a nice little story about looking the part from when I was a post-doc in TCD in the early '90s of the last century. In the Genetics Department we had a weekly seminar series and a small budget to bring in visiting speakers. My boss, who had done his PhD in Edinburgh, decided to invite Howy Jacobs from Glasgow to do us the honour. Coincidentally the department had recently advertised for a New Professor of Genetics. It was a bit late in the century for punk, but Howy appeared with tartan trews and a mohican [still has] . . . which he'd dyed kelly green to mark his visit to Dublin. My Boss, as you do, took the visiting speaker to the Senior Common Room for lunch. As they sat around having coffee in the deep arm chairs afterwards, a couple of tweed-jacket-leather-elbows academics approached. One of them arched an eyebrow to indicate irony and said
"Ah Paul, is this one of the candidates for the Chair in Genetics? Won't you introduce us?"
"No, this is Howard Jacobs, the Lister Professor of Microbiology, at Glasgow, he doesn't need another chair"
<pffffffff> collapse of stout party!
Posted by BobTheScientist at 07:17