Seven years ago I drove in the dark through storm and flood to watch Jiro Dreams of Sushi - a documentary about Ono Jiro 小野 二郎 [family name first] who had been working in the restaurant trade for - - - 70 years. Here's a short tributary in which the master of the old school meets René Redzepi, the creator of Noma, a restaurant in Copenhagen [Sunday Supplement] that has twice been voted Restaurant of the Universe by the Inner Circle of Foodies. I'm not a foodie like Dau.II is  Foodie but on some level I recognise the parallels between lab-bench and counter-top. One common feature is the value of A Good Pair of Hands that person who can let their hands do the working without constantly thinking about what's going on. AGPoH is also important in drumming. I am the antithesis of AGPoH but I come closest to that state of being when I'm cooking: it's not reproducible but mmmmm is it good.

My Lockdown foodie book has been Hungry by Jeff Gordinier; its subtitle is Eating road-tripping and risking it all with Rene Redzepi the greatest chef in the World.  I'm not sure I would have gotten round to it if the loan period had been three weeks. I'm glad I was given the extra time, because it's an interesting saga about how a grown man with two children and a breaking marriage becomes a total groupie for an Albanian/Danish cook . . . and haemorrhages a lot of money to hang with his guru in Mexico, New York, Sydney, Norway and Denmark.

It's a genre in't it? Eat Pray Love was about a rich white woman who found that money can't buy everything anything that seems worth striving for. That went viral, was made into a film and made the author another fortune. Then there was Bill Buford's Heat [reviewed here as Heat Braise Shanks] where another Inner Circle journalist goes off to find himself in the white heat of someone else's kitchen. I'm ambivalent about these people. They can't keep their marriage on the rails but can career off in wild directions to find their true selves. otoh, why must we expect them to like the hand of cards dealt to them by fate and circumstance? Isn't it better to have an epiphany like Bill Bryson realising that he should have been born in Europe; or Niall Deacon parking sheep-farming to be a stone-mason? This is what you are likely to be presented with at Noma: 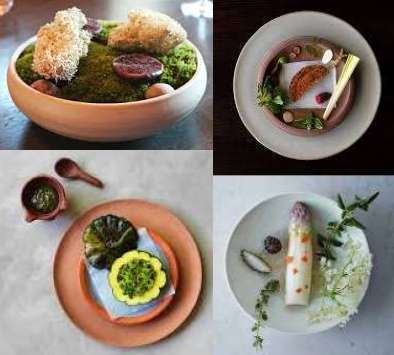 Call me conventional, but I think I'll stick to the traditional recipe for spotted dick.

René Redzepi is neat because he is clearly Out There when it come to giving something a Why not? whirl. Forget slavishly following in the footsteps of Escoffier and doing things because it's always been done this way.  Previously unexploited molluscs and crustaceans get air-freighted from Norway to be plated with ant confit and trout swim-bladders. The expense is "exclusive" and so the only way you and me are going to get a sniff is to sign up as a scullion. But bring your ladle, because you'll need to fight off a score of hungry wannabe plongeurs who would gladly fill your toque.  And Gordinier's book? It's okay, when you get past the self-pity and the eye-watering cost of pushing the foodie envelope.


Posted by BobTheScientist at 07:22