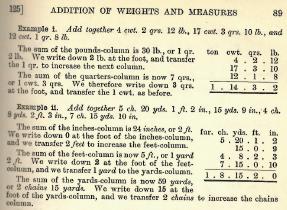 I just dug out a copy of Pendlebury's New School Arithmetic [with answers!] 1924. It was first published in 1904 and reprinted 22 times over the next 2 decades. Must have been a desirable commodity. Looks like the planner at the publishers was not really on the ball. It must be cheaper to set up once, or a few times, and then print enough copies to satisfy demand. Then again, 20 years is a generation of new pupils coming through schools and looking to master compound interest, book-keeping, measurements, foreign exchange and graphs. The publisher certainly wouldn't want to plunge the whole warehouse space on this one book. If another book came out in competition with Pendlebury then the publisher would look a bit silly with stacks and stacks of unsellable stock.

Yes, yes, all very interesting about the economics of early 20thC publishing, but worrabout the 'Rithmetic?  You'd think that arithmetic would be the same as it ever was, since the Egyptians used a 3-4-5 triangle to to make their pyramids square but the past is a different country in ways that transcend the fact that pocket calculators only came on the scene in about 1975. Consider the gratituous difficulty of adding in units which are related by different multipliers. In sensible = decimal = "metric" addition "carries" numbers when they exceed ten. In summing weights, as in the top pictured  example:
Everything is chunked differently! When we bought potatoes in Moore Street market in the 1970s, it was typically as a quarter stone = 3.5 lb = 1.5 kg. Now nobody buys loose potatoes, let alone in such bonkers quantities. I've been here before where you can get help to sort out the second illustrative sum, which involves lengths. Exec.Summ: 12 in ; 3 ft; 22 yd; 10 ch; 8 fur; mile; 1760 yd = 1 mile. And don't get me started on the parallel wonkiverse of Troy weights.

That's not the only difference in a 100 year old arithmetic book. The interests and obsessions are quite different too. In the Problems at the end of the book, Pendlebury tries to relate the theory to practice in real life.
Lots more where they came from.
Posted by BobTheScientist at 07:50