I've been a little skeptical about specific sorts of poverty: Fuel-Poverty for one example; Food-Poverty for another. I'm having to rein my certainty about this in a bit from recent evidence.

Food Poverty
The holy father Pope Francis was in Dublin recently. Of all the calls on his time, he chose to visit a soup-kitchen called the Capuchin Day Centre for Homeless People; possibly because the place is inspired by St Francis of Assisi. Between 0730 and 1100hrs the Centre serves 300 breakfasts to anyone who rocks up. Later in the day they put 500 dinners on the table; all served by volunteers. Wednesday is Food Parcel day when they distribute 1400 take-away parcels. In addition they run medical, chiropody, haircut, optical, and welfare-advice clinics. They'll do their best to help with socks, hygiene-products, sleeping-bags too. It's still run by Br Kevin Crowley, who founded the service in the Friary garden in 1969.  Here is the good man telling it like it is. The wage bill is effectively nil [ethics of the voluntariat] but it still costs €2.3 million /yr in 'consumables' of which about 1/6 comes directly from the government. [donate?] 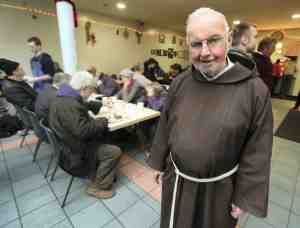 Br Kevin learned early on not to judge, in fact not to ask questions about his clients. He chid a woman for coming to the Centre in a car: if she could afford a car she surely didn't need free food, he suggested. It turned out that she had driven up in her home which she shared with 2 small children. Money is money but poverty is not always fungible. Circumstances had indeed left that woman with a car but she had lost her home, had no work and still had to feed the kids. There are people in Dublin who are holding down a full time job that requires a suit-and-tie who nevertheless are homeless. As I explained last year, all kinds of take-for-granted things are impossible if you are living in a hostel. One of those missing things is knowing that somebody cares if you live or die. Br Kevin lets everyone know that he cares: even if he sends a single mum and her kids back to a single B&B room after dinner: he knows that she knows that he will worry if she's not back the following week.

I learn a lot of this How To Be a Mensch and Do The Right Thing stuff from my daughters. We were down in Cork last week visiting with Dau.II. Every morning she goes to work across a foot-bridge over the River Lee. Every morning she pauses to greet the homeless man who has made that bleak place his pitch. Sometimes she'll slip him him some cash but she reckons eye-contact and acknowledgement is worth more than €2.  Last visit we were walking through town and she said "Y'know there are no public water-fountains in Cork City?" It's been the longest, hottest, driest, summer since 1976 and a single 500ml bottle of water costs €1. How many of those would you need if you were on the street all the long day? The back of an envelope might indicate that 20% of your dole-money might go on water. If you have a home and a work-place  [HSA regs p27] you have access to a tap: you may, like many of my students, choose to suck on a water-bottle like it's yer mammy's teat but you don't have to.

Louse-poverty
I had occasion to visit a chemist a while back for some gamma-hexachlorocyclohexane / Lindane / Gammaxene against the head-lice Pediculus humanus capitis - purely as a precautionary / prophylactic measure after coming into contact with school-going children. For the last six years, I've taught Human Physiology for The Institute's Diploma in Pharmacy Technician Studies, that's about 200 ex-students floating about the county, so they collectively know more about me than they need [or desire to know]. When my thumbs went weird, I bought a wrist-support from Amy F in McCauley's. When I bought hot-water bottles for everyone's Xmas present last year, it was Noelle C who served me. We're told there is no shame in head-lice, but I was glad I didn't know the lady behind the counter in Nolan's of Bagnelstown when I asked about m'cooties. I choked and spluttered a bit when she asked €16.84 for 200ml of de-louser: "It's okay for me, I've got a job, but what about some unfortunate single parent on welfare, where is she going to find €17??". Counter-lady agreed that it was an issue, and that maybe that's why poor people choose lice rather than treatment. And that might be the reason we haven't eliminated this irritation years ago.

Period-Poverty
News last month was that Scotland had voted to make feminine hygiene products freely available across the country. The project is led by Community Food Initiatives North East (CFINE) in Aberdeen. They claim that between menarch and menopause a woman will need £5,000 to manage menstruation; that's 30 years x 12 months = about £15 per cycle. That sounds right from what I hear from my female rellies. All my female rellies are working, and can afford what it takes. Seems that some poor girls are not going to school for several days a month because they can't pay for reliable protection. Me, I don't think its fair to force women to make a choice between pasta or period.
Posted by BobTheScientist at 07:21