There is a famous study of social engineering which went all pear-shaped. Once upon a time in Israel there was a creche. Professional parents would deliver their children in the morning and go to a high powered job elsewhere. The kids would be fed, cleaned and edutained by a team of young people working on the minimum wage. At the end of a long and tiring working day, The Help just wanted to go home but some of the busy-busy parents would be late picking up their offspring. The creche implemented a new policy whereby parents would be charged extra if they failed to collect on time. In response, the frequency with which parents were late went Up - indeed it effectively doubled under the new price structure. Why? Because the now parents felt that they were entitled to be late because they had paid for the privilege. Under the no-pay model, the parents felt a sliver of guilt about wasting the time of the creche-workers and so tried harder to get there before the doors closed. It is the most frequently cited example of the Law of Unintended Consequences. 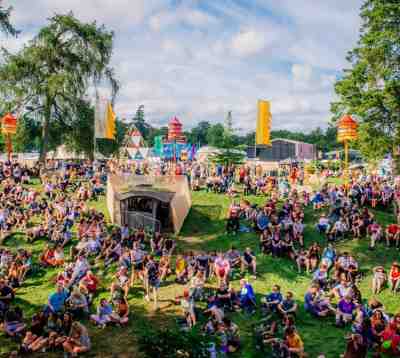 Electric Picnic #15 [above: looking like the technicolor part of The Wizard of Oz] just wrapped up in Stradbally Co Laois. Ireland's Answer to Glastonbury has been running since 2004. Because Stradbally is located in the middle of nowhere, most of the punters rock up and camp out. Tickets cost an eye-watering €200, so it's not really for people suffering from food-poverty. Then again, I guess if you saved €5 a week for a year by refusing booze, you'd have the ticket price. With that much as the ante-up, the hardy festival-goers often invest almost as much in kit: tent, sleeping bag, inflatable mattress for softies, slab of tinnies on a trolley, gaudy wellington boots, condoms, fly-swatter, sun-screen, poncho. At the end of 3 days on the batter, the dear departing only want to get home and have a hot bath and some comfort food. Accordingly it has been the habit of many punters to abandon the tent, the sleeping bag, the wellie that served as a bed-pan, the now empty trolley . . . and head home to nurse the head.

Last year everyone had fun. This year ditto. But afterwards, the organisers, with the help of troops of boy-scouts, carted away an estimated 500 tonnes of garbage from the festival site - that's an average of 10kg! for every person who bought a ticket. Bulldozers were brought in after the boy-scouts ran out of steam.  Like at the Israeli creche, IF you say that abandoned tents and sleeping bags will be recycled for the homeless THEN you allow people to justify that fact that they cannot be arsed to clean up after themselves.

But 'tric picnic was not all a complete bust. At 1600hrs on Saturday 1st September, the amazingly talented Waiting For Smith, whom I've tribbed before, was up and at 'em. Resistance is useless, you'll have to hear him again now: