Gold in them thar lobsters

Back in November 2015, we were getting sentimental about Isle-au-Haut off the coast of Maine. I wrote that piece partly because I love islands but partly because I like the down-east folk songs of Gordon Bok. Despite its French name, Isle-au-Haut is indisputably part of the USA. Noting that 5% of the people in Maine still speak French at home, a few French names are to be expected. 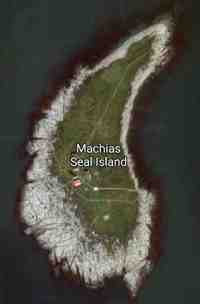 130km NE Isle-au-Haut is another speck of land that humps out of the inclement fog-bound sea at the mouth of the Bay of Fundy: Machias Seal Island. At 8 hectares MSI is half a field bigger than our farmlet in the middle of nowhere in SE Ireland so it's not worth going to war over. But you can't underestimate the capacity of human beings for destructive greed and myopic folly. Because of this MSI and a broad stretch of the surrounding ocean is in dispute between Canada and the USA and has been for about 200 years. The last time those two countries almost went to war was over a potato-eating hog in the San Juan Islands [whc prev]. Nobody is growing potatoes on MSI and it would be a disaster to let loose a pig there because it is a famous and diverse sea-bird sanctuary. The most likely casus belli here is not on the island but lummocking about the sea-bed of the surrounding sea - LOBSTERS. Because territorial waters surround political land-masses, sovereignty of the island invests control of the lobsters.
The Canadian case is inherited from the British who, in 1621, granted Sir William Alexander all islands within 6 leagues of the coast of "Nova Scotia" to be part of his patrimony. New Brunswick was later hived off from Nova Scotia to become its own province. They can also claim squatters' rights because in 1832 they built a  lighthouse and cluster of service buildings that show up as red and white dots on the satellite view [L]. The island is right in the middle of the seaway to St. John NB and the other ports and harbours up the Bay of Fundy, so a lighthouse had clear utility. The lighthouse has been rebuilt and refurbished since 1832 but more or less continuously occupied by Canucks ever since: de facto they own it.

The American case stems from Article 2 of the Treaty of Paris which wrapped up the war of 1812 between UK and USA. That says that any island less that 20 leagues off-shore and South of the St. Croix river is part of the United States of America. The St Croix runs between Calais, Maine and St. Stephen, New Brunswick and I crossed it there in 1981 towards the end of a big road-trip getting data for my PhD. Machias Seal Island is clearly South of the mouth of the river and definitely within 20 leagues of the coast of Maine, so I think de jure the Yankees have it.

At the moment, despite some shape throwing by Prime Minister Trudeau and President Trump. Canada and the USA are at peace with a helluva lot of traffic - both goods and people - across the border every day. Nobody cares enough about the lobsters [which are getting scythed by fishermen from both sides of the border] to start a war and both sides have refused arbitration by the International Court of Justice in The Hague. But if oil is discovered under the sea in what they call the Grey Zone surrounding Machias Seal Island, then we can expect a bit of gun-boat diplomacy. The Atlantic has put together a NatGeog-like documentary about the affair. And/or  A life in the day of a lighthouse keeper.

A whole archipelago of other Blobby islands.
Posted by BobTheScientist at 07:25