Girl on her hunkers

When we re-assembled the Ringstone in 2010 part of the debate at lunch was where to put the pieces. Having the Ringstone in our yard would make it easier for interested parties to find; contrariwise that would increase the likelihood that the whole 1750kg would get lifted by cultural looters.  There are 140,000 archaeological entries in the SMR (Sites & Monuments Register)  or 2 for every sq.km. in the Republic. As it is also about 10,000 for each employee of the Archaeological Service, they can't be expected to protect them all. Protect them from theft, vandalisation, graffiti or even protect them from the weather.  There was a documentary on RTE last week about one, then famous, case of archaeoklept in 1990.

Some carvings are a lot more interesting than our Ringstone. Ireland, for example has the highest frequency of sheela-na-gigs in the World. Here are six: 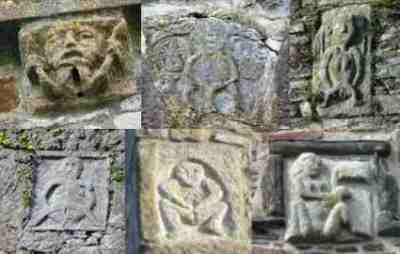 Yes, they are a bit fuzzy and pixellated, but that's because I have readers in Namibia and Cloughjordan who have band-width issues. Even when they were created, the shockin' fuzz had to be imagined rather than explicitly represented in stone. And, to be honest, nobody has a clue about their original function. Heck there isn't even consensus about the derivation of the name, which was first written down by the Ordnance Survey in 1840, capturing a local name for an example of the genre on Kiltinan Castle in Co. Tipp. Indeed that S-na-G, its theft and its replication, is the subject of the RTE documentary cited above. Could be Sighle na gCíoch / Síle na gCíoċ [hag of the breasts] or Síle ina Giob [Cecile on her hunkers].

The distribution mostly in The Pale, few in Hell or to Connaught, and their location almost always in the fabric of buildings of the Anglo-Norman era, suggests that the idea was a continental import. The 'hideous' features designed to discourage an interest in what is being predominantly displayed. That might be a much later Calvinist / Irish-Catholic interpretation from a time when sex was sin rather than fun.  Feminist revisionists have floated the idea that the carvings predate the Anglo-Normans, indeed pre-date Christianity and are best interpreted as a Joy-of-Sex Earth Mother. I think I'm with the Come-on-in-Lads school.

The GoTo site for info on Irish Silés. A previously unrecorded example turned up this April "somewhere in Ireland".

i like my body when it is with your
body. It is so quite a new thing.
Muscles better and nerves more.
i like your body.- i like what it does,
i like its hows.- i like to feel the spine
of your body and its bones, and the trembling
-firm-smooth ness and which i will
again and again and again
kiss, - i like kissing this and that of you,
i like, slowing stroking the, shocking fuzz
of your electric fur, and what-is-it comes
over parting flesh . . . And eyes big love-crumbs,

of under me you so quite new
Posted by BobTheScientist at 06:47