Like all geeks, I have reflected on the increasing power of computers and their decrease in size during my working life.
I recently came across two parallel attempts to convey how much information can be stored in so little space. On your left, we have Bill Gates comparing the information stored on a CD comared to a stack of paper the height of a house. The fact that Gates looks young, shows just how ancient CDs are. On your right is Margaret "NASA" Hamilton [bloboprev] showing how much code she wrote for the operating system of the Apollo space program. If you bought your external hard-drive (for back-ups) recently, it is likely to have 1 terabyte of storage capacity. That's 1000x more than Bill Gates' CD! Hamilton's stack  was keyed into the Apollo computers which had a tiny 72 kb of memory:  it weighed 30 kg!  The CD has about 10,000x the capacity of the instrument that flew to the Moon and back. 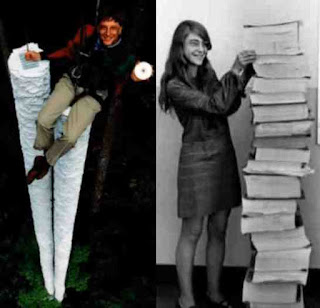 The government is about to release its budget for 2019. The Finance Minister will stand up in the Dáil and, like Caligula in the Colosseum, throw million$ and billion$ out to the waiting public. Most of us won't have a clue about the magnitude of these numbers except to believe that a billion [bicycle, biped, bicentennial] is about twice a million. In the Budget every year there are 3 ENORMOUS line-items
Sum=82% and the rest, individually, nowhere.
Posted by BobTheScientist at 07:26