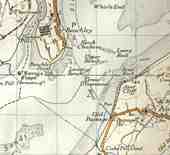 We went to hang out with the G.kids in August which is getting to be a habit. Getting there is a long day's journey. Leaving home at 0650hrs and not arriving in Bath until tea-time. The journey was  a lot longer and winklier when we travelled from Portsmouth to Ireland via Fishguard and Rosslare in the early 1960s. No motorways then, and we had to drive all the way up to Gloucester to cross the mighty river Severn on  the first bridge across the estuary. My father preferred that to using the Aust Ferry which was able to take a handful of cars across the water to Beachley on the Welsh side of the river. I'm not sure if it was the money or a mariner's distrust of the beat up boat and the rippy tides. Here is one chap who opted to take his limo on the ferry. If you watch the trib vid you can see the cables of the Severn Bridge in place in the background. 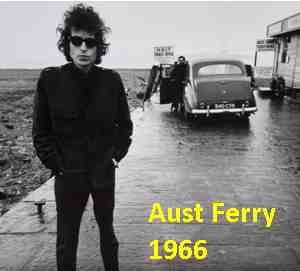 The ferry could have continued to offer an alternative, scenic, earth-bound, water-borne mode of transport but the new toll bridge charged only half-a-crown against the ferry's 9/6d - as near as dammit a quarter of the cost of the boat-trip. Accordingly, the ferry closed down the day the bridge opened for business. Sic transit.

The bridge was arrestingly beautiful but not without its problems. Down on the Waterford coast, where we spend a lot of time hanging out, the half-life of a steel wheel-barrow is about 18 months. Even a mile from the actual sea the corrosive salt-laden air makes short work of any exposed irons. The Severn is tidal, even periodically boring, so corrosion of the steel fabric of the bridge is a major concern. The main cable-stays are spun from 8,000 x 5mm steel wires, and the road bed is made from sections of box-girder that were fabricated on the shore, floated out into the stream and hauled up to height. That ABC method of construction is cheap and cheerful until, like in Sweetwater this spring the whole thing comes tumbling down.  You can only paint the outside of the cables and the road-bed is covered with asphalt, so inaccessible to easy inspection, let alone remediation against the rust. I've written about the extent of this corrosion problem in the context of 50,000 bridges the US Interstate system many of which were constructed in the same decade as the Severn Bridge.

In early 2017 His Trumpiness was quick to say that he would allocate $1,000,000,000,000 [$1trillion] to refurbishing the transport infrastructure of the USA. That's a fantastical amount of money: more than 10x the annual spend by the government of Ireland. But it is nowhere close to what will be required. Reflect along with Financial Pundit Pete Browne [aged 6 ½] that getting a single [albeit very large] dam back into working order is going to cost $1.1billion. From that analysis, the American tax-payer is going to have to find 50 times as much money as Mr Trump is prepared to cast in concrete. $50 trillion ÷ 325 million people is "only" $15,000 for every man-trans-woman-and-child, so that they can continue to drive cars where- and and when-ever they want in the American way. For perspective the new World Trade Center Towers 1 and 2 each cost $4 billion to build.  The Empire State Building, back in the day, cost $40 million == about $500m in today's money. 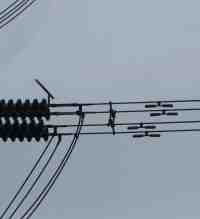 What I really want to write about here is the fact that the cables on the Severn Bridge are subject to another intrinsic-to-design problem - resonnnnnance. I wrote about this in 2014 w.r.t. trees and tall-buildings flapping about in the wind and breaking-step while crossing bridges. Although the Severn Bridge connects two quite low parts of the flood-plain, the structure is nevertheless at right-angles to the prevailing wind which funnels up the estuary from the Atlantic. At certain wind-speeds, characteristic for the length of the structural cables, the wind will start to strum them like a huge cello. the cables will hummmm back in tune, the wind will exaggerate that response and before you can clear the bridge of traffic the whole structure could be dumped onto the low-tide mud 40m below. But engineers know all about this, since the Tacoma Narrows Bridge shoook itself to death in 1940. What they do is make a model of the structure in a wind-tunnel to calculate the stresses under predictable wind-speeds and add Stockbridge dampers [L the dog-bones on an electricity cable] of particular mass on the ends of a subsidiary cable attached to the main catenary [prev]. The picture [L] comes from PylonOfTheMonth, with an nice essay on the theory of dampers. And, hey, they work.

The transport ministry in UK has since built a second bridge across the Severn to alleviate the traffic congestion and better integrate the industrial heartland of South Wales. More recently that eliminated tolls in one direction and doubled them in the other. This was primarily to avoid a tail-back from the toll plaza adding 600 stationary tonnes [3 lanes, each with 1 tonne of vehicle occupying 5m of roadway] of traffic all the way to the main 1,000m span across the river. In the mild, if salty,  Atlantic Gulf Stream falling ice is not usually a problem but on two occasions, one at each end of 2009, both bridges had been closed traffic when 10kg roof-piercing icicles started to rain down from above.

Enough? Enough!
Posted by BobTheScientist at 07:28