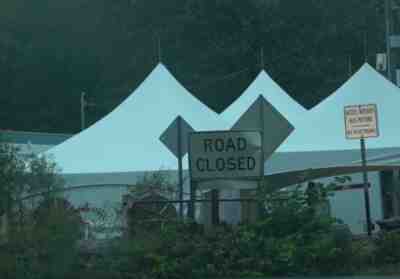 . . . I'm an African woman, give me a job and I can Work. That's a quote from a CBC piece about crossing the US-Canadian border just N of Plattsburg NY.  It just broke my heart. Maybe because these Nigerian and Haitian asylum-seekers are my sort of people: articulate, educated, wanting a better life for their children. They'd rather be banged-up arrested in Canada and put through the mill of bureaucratic scrutiny with a very real chance of being deported at the end of the process. I've deleted the banged-up [slang for imprisonment] because I am fairly confident that the RCMP are going to do their job with efficiency and compassion and without shooting anybody because they're black. Roxham Road [sat-map]is an illegal [accès interdit aux pietons] crossing point but there are tents on the Canadian side;  and police-officers officers are deployed according to the Greyhound bus schedule for arrivals in Plattsburg. taxi-drivers make a handsome living from the 40km one-way fare to a place in the woods. Here's a piece about what actually happens Canada-side nowadays and how the process differs from the USA. 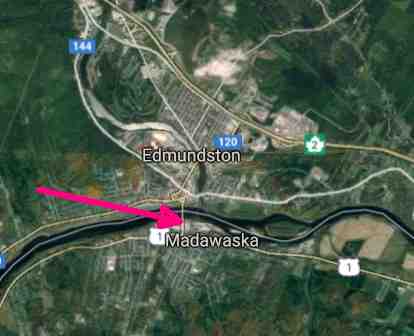 My empathy is also driven by the fact that in 1981, I also made an illegal crossing of the US-Canadian border. My boss and I were on a field trip in the big old Ford Galaxy [a bit like Thelma and Louise without the cliff-edge ending] from Boston up north to Montreal, Trois Rivières, Québec, Caribou, ME and so home. We spent one night in Edmundston, NB and were fossicking around gathering data. Neil spent a few teenage years just down the road in Caribou, Maine and so was quite at home. He suggested that we stroll across the St John River and get a bite to eat in Madawaska ME. We presented ourselves to the US Customs and Immigration with a strong waft of The Patriarchy about us. The official at the desk waved us through, we loafed around, had dinner and then walked back to our temporary digs in Canada. My Visa to the US clearly said, Student and Multiple Entry and I was definitely cleared for Canada, so we thought no more about it.

The next morning we were back again, this time with the car, the same official was unaccountably delighted to see us. It turned out that he'd got a bollicking from his supervisor the night before for allowing an undocumented alien to cross the border even if accompanied by a [patriarchal] US Citizen. According to the official record, the said Alien was still in the USA doing who-knows-what. My miraculous re-appearance from the Canadian side allowed him to balance his books. Seemingly, he should have made me fill out Form 1032/A/56 so that the number of Multiple Entries on my visa could be clocked for statistical purposes. Those were much easier pre-9/11 times especially to-and-fro to Canada. It must be desperately stressful now. Making the bureaucrats work.
Posted by BobTheScientist at 07:14