Despite teaching on the Cert in Pharmacy Tech course, I really rarely need to visit any pharmacy. Which is a good thing because I don't particularly want my [ex-]students knowing about my rashes, weeping sores, and over-active bladder. (Doctor, doctor, I'm Paris; What do you mean, Paris?;  It's In Continent innit!). I might be tempted to buy some off -pharmacy remedy that worked and could be obtained without too much scrutiny or enquiry.

Anyone who has raised children will tell do that the sleep deficit is the real killer. When The Boy was born we were living in Dun Laoghaire in a garden flat. We had to make it up as we went along, being a long way from either of our mothers, and do the best we could. Hadn't a clue, me. I thought The Beloved had ruptured a kidney when she went into labour 1 week early, which meant she was in the wrong (local; Ob&Gyn-absent) hospital. It was a nightmare to raise an inter-hospital-transfer ambulance at 0200hrs, whereas a collect-labouring-mother-from-home ambulance would have been there in 20 minutes. The only thing I thought you could do with a crying baby was change its diaper.  We changed diapers seven times one night! Several of them bone-dry. But the child continued to grizzle or howl for hours. 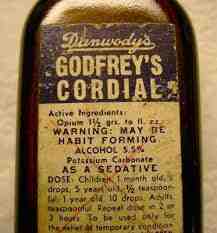 Another solution would have been welcome. If we'd been managing the problem 100 years earlier, it is quite likely / just possible we would have tried Godfrey's Cordial. Which was well-known to put infants to sleep. . . and keep them in that state. I've written before about buying Dozol for G, when she lived in London - although it is sold as a painkiller [paracetamol] and anti-inflammatory [anti-histamine] the name and the label tell the World that babies will sleep in Dr Dozol's care. I was wrong to believe at the time that it was 4% alcohol: that's gripe-water. Even gripe-water, invented in 1851 by apothecary William Woodward, contains no alcohol in its modern formulation. As young parents all we needed was enough sleep each night to be able to function during the day-time. In the 19thC, some poor mothers had a rather different agenda: they needed to keep the child quiet while they went out to work: singling turnips, pulling carrots or making hay.

It's a bit like several species of African antelope where the dams, when their time of delivery approaches, find a quiet and secluded spot to drop the calf. There are two survival alternatives: either the newborn is up and ready to trot within a few minutes or it needs to be fattened up and continue its development. Secreters return to base once or twice a day, meanwhile making a living feeding themselves to replace the milky calories. The calves are programmed not to bleat for mammy and presumably some evolutionary changes have been made to how they [don't] smell.

The problem was that these opium-quieted babies often died, not so much from opium addiction or the direct effects of the booze; it was more likely that 'inanition' or 'failure to thrive' would appear on the death certificates. What this basically means is that the poor wean was too sleepy to feed and wound down in a spiral of unresponsiveness.