The left hand of twinness

Being a twin makes me marginally more interested in Twins than normal people.  I had a thought [hypothesis would be too strong] that in opposite sex fraternal twins the boy would weigh more than the girl.  But just because that was true for me and my sister, doesn't make it true in general. This year I am down to one class of 1st year cell biology. I noted that there were two women with the same surname, and their thumbnail-pic suggested that they were twins. On enquiry, that hypothesis turned out to be correct. At the end of class, the students are meant to write up the day's events into a lab book. I felt virtuous because many of last year's finished lab books were less than half used. So I had ripped out the so last year darling old pages and invited the kids to reuse the rump. Some enterprising students even took these half books for using for their physics and chemistry labs. I think I've saved about 10 kg from landfill. 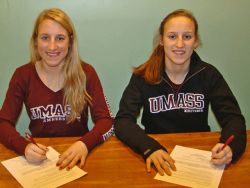 But here's the thing: "my" twins were writing their reports with opposite hands! In this they were like Allie and Brook Sabia [R signing contracts]. What's that about? Is that normal, or common, or rare? We know that left-handedness is determined partly by genetics and partly by environment. Whatever the cause, the statistics are quite consistent:  about 10% of us write sinister. People of the generation now ending their lives, including my late lamented m-in-law, all too often had left-handedness b'ate out of them, so there are fewer kacky-hands of that age. It turns out that, in twins, whether monozygotic MZ identical or dizygotic DZ fraternal, the rate of discordant handedness is about double what you'd expect - 20-25% of twins have one of each. 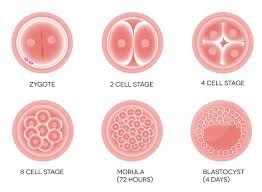 That makes you think about how handedness is determined in utero. Could it be that, in the packing, one hand is free to wave about and the other is inhibited by the extra body?  MZ twinning happens much later in the process that I thought. I imagined that the separation of the zygote into two lumps would happen at the 2 4 8 cell stage. But not so; current theory  holds that around 4-5 days after fertilisation, the hollow ball of cells called the blastocyst collapses in on itself and two hollow balls are formed. These implant in the wall of the uterus as usual.
Posted by BobTheScientist at 07:19