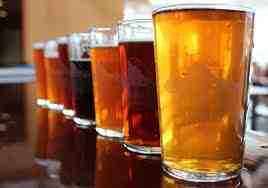 You know how it is. You've had an exhausting weekend wearing out the sofa and shouting yourself hoarse at the stupidity of the referee. The sun is clipping the trees on its way to bed and you're lining up [as in R] the evening's entertainment. You are maybe also thinking about something to eat. The end of a perfect day.  Then there's a voice at the front door: one of our regular hill-walkers is there to report that there is a sheep in the Aughnabrisky river up of the hill above us. "It looks like it's stuck; it's certainly exhausted; it's got a red mark on its back; I tried to pull it out of the water but it was too heavy".  Well dang-and-blast-it, that is far too little information to identify the owner, so that I can allay my conscience with a phone call. 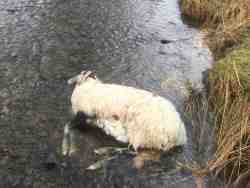 Harrrumph. I guess it's up to me, in my MSF scrubs. At least I had sort-of-directions as to which section of river "between the red van and the corner of the forestry". I threw on m'hat, seized my Nokia 3310 and set off North by North East. Despite recent rain, the river was still really low after the long hot dry summer that we've had and I started well down-stream of the most likely Sheep Down location and worked my way uphill. Soon enough I found the wet sheep half immersed in water and rather than filling my boots and soaking my clothes, I stripped off and plunged into the river. It didn't take long to wrastle the moribund cr'ature onto the bank and drag her clear of the water to a level place which could catch the last rays from the setting sun.  The red mark on her back was, if you  know what to look for, an S. I also made a note of the number on the ear tag EI-00445355-4639E. Job done! Clothes On.

When I got home and reported in to The Beloved, she suggested that the headline in next week's local paper might be "Naked farmer has way with sheep - drone footage".  But it wasn't me, I've been Garda vetted.
Posted by BobTheScientist at 07:32