That would be The Divine Order, a 2017 film about suffragettes in Switzerland . . . in 1971! It was the film that launched the 2018-19 season of the Blackstairs Film Society and we went Out On The Village last night, paid our sub and were delighted by the film. It seems appropriate to review such a film on International Blasphemy Day.  1971? The year women got the vote in Switzerland?? Surely that's a typo of 1917??? Because women got the vote in Ireland on 6th Feb 1918. Not all women, mind you, only sensible women who were older than 30. It took the foundation of Saorstát Éireann the Irish Free State (1922) to give women equality with men in their voting rights. For Britain and Northern Ireland in took a while longer [Representation of the People (Equal Franchise) Act 1928]. The nuttiness of extending voting rights in 1918 was exposed by a dispensation for men - if you had fought in the Great War, you could vote at 19 rather than 21.  Recent research on the adolescent brain, suggests that 18 might not be the best milestone for the age of discretion. Far too many young men in their teens and twenties seem to be bat-shit crazy when it comes to cars, booze, bullying, office-hours and sex. Should boys who drive cars with drink, but no seat-belts, on board be allowed to determine who gets elected to parliament? 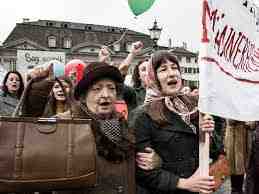 Meanwhile back to Switzerland, 1971. The trailer for Die Göttliche Ordnung catches it: there is a referendum in the air: it will determine whether The Cantons can join A is for Azerbaijan, Belgium, Côte d'Ivoire, Dominica, Egypt, Fiji . . . in treating women like adults. The lead is a young mother who is happily married and embraced by her wider family and the local, isolated, rural community. She is a helped to reconsider her position by a younger Italian immigrant and an unmet desire for wider, bluer horizons. The film is neat, probably too neat, in its investigation of the issues. A shrewish, elderly, secure-in-her-certainties woman is the main employer in the village and also ardently against change. A rakish, elderly, slightly dissolute woman is our heroine's first local supporter. There are stupid, boorish, violent, complacent men. But there are also men who are confused about their position in a rapidly changing world, who want to do good, who are fundamentally kind. Its basically happy ending ties everything up with a neat bow.

But getting the goddamn vote is just the beginning. In Ireland, women got the vote in 1922 but could only be employed in the civil service if they were unmarried. They were expected to get back in the kitchen and spoil their sons rotten after that. The pay scales were skewed, the glass ceiling was bullet-proof, and it's only this year that we're starting to deal with uterine autonomy by Repealing the Eighth.


and I'm all for conduct or speech inciting people to rebel against the authority of a state or monarch [=sedition] on such matters.
Posted by BobTheScientist at 08:49