My thumbs have gone weird

Withnail & I groupies, of which I am one, will recognise that phrase from the opening scene. 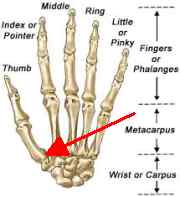 Over the last year-ish, I have developed a peculiar - because intermittent - pain in the base of my thumbs; mainly in the right (dominant) hand but also occasionally in the left digit. If you take the trouble to look, rather than taking the whole amazing feat of bio-engineering for granted, you'll notice that your thumbs have but two phalanges. The other fingers have three, jointed together by knuckles. With wonderful economy of developmental instruction, the great toes also have two pieces and the other toes three. This gets a little ridiculous when you get to contemplate the pinkie toe of a toddler and realise that her tiny toe, no bigger than a wart, has three diminutive bones inside.  If you try to touch the base of your pinkie finger with the tip of your thumb you'll see the palm fold in half as the thumb's metacarpal flexes over to obey your instructions. The seat of my trouble [L indicated by red arrow] is where the thumb's metacarpal makes contact with the wrist.

It's not usually debilitating, and as a Protestant, I have high pain thresholds from wearing that hair-shirt all day and plunging into a cold bath before breakfast. But it makes holding a pen and writing a pain and I have to do this to give feedback on the many lab-books which I get to mark each week at The Institute. I was mystified as to the root cause, but The Beloved had a theory that I had sustained an awkward blow from a sheep at the last shearing. After toughing it out for months, I finally made an appointment with a local physiotherapist who was going to give me more care and attention than my GP. It's a difference in the business model: one client an hour rather than 12 and no licence to prescribe drugs. I had two sessions, one more or less exploratory  and a second follow-up after two weeks of prescribed exercises.  The exercises were designed to build up the muscles which moved and supported the thumb-joint to take some of the strain off the ligaments that hold the bones together.  I was instructed to press the thumb against an immoveable object in three or four different directions for the count of five and repeat 10x, for as often as I had patience. I found I could do this nicely as I drove the car to work. After the second session, the physiotherapist said she could do no more for me. I feel better for having consulted a professional, am reassured that I don't have bone-cancer and have a set of exercises which can do no harm if I carry them out assiduously.

Fast forward a few weeks and I was talking about my thumbs [it's always about me me me] with The Boy's partner and she made a comment about ligaments and pregnancy. That send me back to an earlier Blob about the symphysis pubis which is the little sprig of connective tissue that joins the two wings of the pelvis in the front. In normal everyday life you want minimal spring down there because your pelvis is made for walking. At the end of pregnancy women do better if they develop a little more give: it makes delivery of an outsized head easier. Women who didn't get sufficient elasticity during childbirth didn't make it and their children didn't either and those who developed this developmental trick now people the planet. The switch between firm and springy doesn't always work for all women and I mentioned two cases, friends of mine, in my previous symphysis piece. Describing the functional trade-off doesn't tell you how the solution is achieved. Because it's part of normal human physiology, you won't be surprised to hear that hormones are involved. Hormones are the work-horses of how we tick; they are produced in one place (an endocrine gland) and act elsewhere. 'elsewhere' they encounter a hormone receptor and that triggers a set of biochemical reactions inside the cells of the body. If those biochemical instructions are generic: "replace collagen with elastin in the ligaments" then, although the primary target is the symphysis pubis, ligament loosening is likely to be quite wide-spread. The hormone primarily involved is called relaxin and it is related in structure to insulin. The cruciate ligament in the knee, for example, is believed to be adversely affected in pregnancy. You want to take it easy on the soccer field if pregnant and not only because you are carrying a spare football about your person. [Early] pregnancy didn't stop Serena Williams winning the Australian Open in January.The hormonal changes of pregnancy are mediated by two 'master' [a highly inappropriate coinage in the circumstances] hormones: estrogen and progesterone. Women produce more estrogen during a single pregnancy cycle than during the whole of the rest of their life. That's a big change in concentration and unexpected consequences are likely to pop up in unexpected places. The thing about evolution is that whatever works well is what gets fixed in the gene pool even if it doesn't work perfectly.

Evolution is Good Enough.
Posted by BobTheScientist at 07:08