Money is money. The invention of money - a universal medium of exchange - created wealth partly because it made life easier. If you've ever tried living cash-free, in a LETS scheme for example, you'll find your fellow anti-capitalists are heavy on aroma-therapists and light on plumbers. LETS = Local Exchange Trading System. If you ever get help from your neighbour and they refuse payment, you'd better be prepared to have them demand your first-born at a really inconvenient (to you) time in the future. Those reciprocal favours are really important social glue but quite hard to assign a monetary value. I wish there was more demand for help with biology or statistics in the deeply rural community where we live. Then I'd be able to add value to the exchange. I'm glad my firstborn has escaped because when he spent some time with us 15 years ago he was requested-and-required to paint a concrete fence across the bottom of our neighbour's yard . . . and I felt morally obliged to help him.

In January I confessed to being too thick to understand the concept of fuel poverty as distinct from, well, poverty. If the government was going to eradicate it, surely they would give recipients money which it would be hard to ensure got spent on bags of coal. Old Age Pensioners, for example, get €9.00 / week extra as Fuel Allowance between October and March. But that just gets added to Pat the Salt's General Account. Fair enough: four pounds of butter inside might be as valuable as bales of briquettes outside: not least because he doesn't have an open fire-place!

Now the idea of Food Poverty has sailed over my horizon and I sense that this is as equally suspect as Fuel Poverty in that all poverty is fungible (= mutually interchangeable). There is no Euro in a purse that is for dinner and another that may only be spent on heating. They have at least defined their terms. You suffer Food Poverty if you are
All three must apply to count as Food Poverty. We know that it is harder to eat well if you are poor. Salads are more expensive than hambugger and frozen pizza. Eating crap is bad for you but it is also bad for the state, which will have to treat and manage your obesity and diabetes, so it is worth putting money into getting proper food on the plates of all out citizens. But I don't find Food Poverty to be helpful either a) in the debate or b) in the solution. This is not denying that hunger is a problem among the poor, especially in dog-eat-dog societies without a welfare state. Check out this thread explaining the difference between being poor and being broke. Broke is better.

In 2013, Mandate and Unite, the two big trade unions, commissioned a report on Food Poverty, and summarised the data in the peculiar map below. They chose to scale the size of the labels by the absolute numbers in each of the 26 counties. Dublin's 112,300 is bigger than Leitrim's 3,400 . They must believe that the geographical location of food poverty is somehow useful or informative. 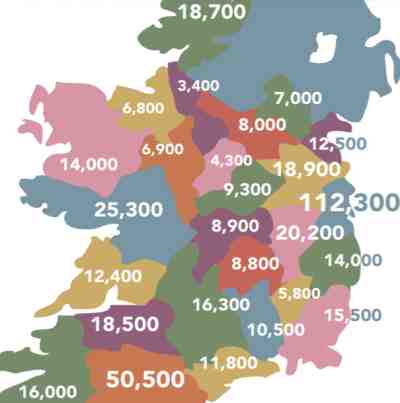 The Journal picked up the press release running the story under the same map and drew this conclusion "The map shows Dublin fares worst with 112,300 people suffering food poverty. Larger counties like Cork and Galway follow close behind, with 50,500 and 25,300 people in need of assistance respectively." That jangled my crap-detector alarm because it implies that cities have a worse problem with food poverty than small towns and rural communities. It might be true: you might have a bucolic image of peasants at least being able to have some drills of spuds, fruit in the hedgerows and snaring a rabbit or two for Sunday dinner. But I thought it called for some analysis.
These data are remarkably, almost absurdly, well correlated: r = 0.98 which is more clearly indicated in a scatterplot: 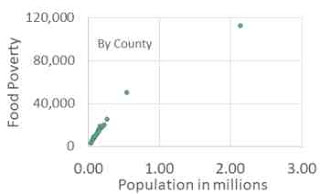 The take home from this is two-fold. 1) the food poor are always with us: the number of people who suffer is very close to 10% of the population in every county except Dublin. 2) in the Capital, (the lonely dot in the top right corner of the graph) there is about half as much food poverty as elsewhere. In other words is would be better to scale the labels the other way round: Dublin's Food Poverty is only 112,300 while Leitrim's is3,400. Did I mention FoodCloud? I did, last December. One of our active neighbours signed up for this a couple of years ago and is the contact for the local ALIDL store. They will call her to say that they have 50 turkeys, or six boxes of tiramisu, or some really weird exotic cake which no normal Irish person would buy. She will drop by after work and load as much of the At Sell-By Date food as can fit in her Nissan Micra and then drop it all off at a couple of Traveller halting sites, a few households of indigent Romanians and the young chap with epilepsy. For people with no spare cash and probably a generous shaking of debt, this appearance of food, even peculiar food, is viewed as manna from heaven. That's a lot sounder that carrying the unsellable food out to a dumpster and locking the trap-door.
Posted by BobTheScientist at 07:55