I was going to call this ramble 'Saying Thanks' but I see that I've used that before. In that story it was me being thanked by my students for giving them all my care and attention while they were doing their research project. Every year since I started at The Institute, I've made myself a page of names & thumbnails for all the 1st year classes which I teach, of which there are several. Admin & Registration captures a photograph of each incoming student and reduces it to a postage-stamp on their Student ID card. They also publish the pics under a links called "Student pictures by year and course". Annoyingly they are just slapped up there as they come off the digital camera: when you scrape the image off the web, it fills an A4 page - far too big for any purpose to which the photo might be put. I've gotten quite efficiently robotic in converting these bed-sheets into 10x15 mm snapshots that can print 18-to-the-page for each practical section: I use the wonderful Irfanview. [aside: I also use Irfanview to reduce The Blob's embedded pictures to a few kilobytes so that the pages load quicker in Botswana. The fact that these pics are fuzzy and pixellated is part of The Brand]. Having made a set of student ID sheets for my own bonding benefit, I send them out to the other lecturers on the course. Some of them say thank you.

Last year, it was a disaster, there was a new admin-person in charge of registration and they couldn't or didn't submit the photos for the IT Crowd to upload, classes had been running for nearly two weeks before I had the danged things sorted. This year, it's back to normal pacing. I was so grateful that I could have this teaching aid in the bag before classes started that I sent an appreciative e-mail to Admin Person. I've learned that it doesn't help to send intemperate e-mails when things don't go right. But it is better to notice when things which we take for granted go as normal. Imagine what it would be like if your car didn't start in the morning, or the toaster blew a fuse on your bagel. You'd be silly thanking your toaster but it's no bad thing to thank your bus-driver for delivering you safely. 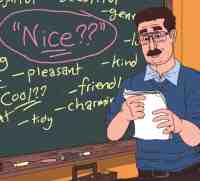 I was reflecting on this gratitude craic because I watched a vid called The Importance of Reaching Out To Old Teachers [clip L]. It's by Winston Rowntree a Canadian webcomic dude who writes something called Subnormality.  If you've read and retained all 1.3 million words of The Blob, you'll appreciate the importance of a high school biology teacher called Mr Wilkinson in its backstory. When I returned to England with a PhD in biology, about ten years after I left school. I sent Mr Wilkinson a copy of my thesis with a note saying thanks for all the fish, trees, ducks, bluebells, dogfish, mushrooms and dinosaurs that filled your lessons and my mind with wonder. He was clearly bemused, found my thesis obscure to the point of unreadability, but was well mannered enough to acknowledge my contact. He also mentioned that, by a singular coincidence, one of his twin daughters was going to graduate next Summer from the same university in which I was working. I sort of assumed that he'd look me up when he came to her graduation; but it never happened. At the end of last week, I contacted the HoD Biology at the Old School and sent her a fillet-of-Blob all about Wilkinson and his inspirational teaching. He's probably dead now but his daughters are ten years younger than me, and may like to know that their Dad made a difference.
Posted by BobTheScientist at 07:33