We have had quite out of the ordinary weather here in Ireland these last 12 months. It worries me because I now have a job that requires me to travel 40km every day to teach about 100 different students in any one week. It's not fair if, because I choose to live so remote, I fail to turn up to class because of adverse weather. Being brought up to a sense of duty, I get anxious at the thought of missing classes, so much so that on three occasions, I've found a bed in town when dire weather is predicted. We had Storms Ophelia (Oct '17) and Emma (Mar '18) which caused some disruption to my schedule but nobody died. It's got to be said that Ireland has a really mild climate and reasonable weather. I reflect on this every time there are floods in Bangladesh, Houston, even as "the wettest December in Ireland since records began" [= 2015] fades from memory.

This weekend, it is Hurricane Florence which is making waves especially in North Carolina where she made landfall round about breakfast time on Friday. The press seemed to be making a hullabaloo about the potential for disaster associated with slurry lagoons associated with pig farms. That's my sort of story so I offered to talk about it at next Tuesday's Wexford Science Café. The poor old WSC, is tottering along with a thin load of passengers and not enough drivers, but it needs someone to speak each month and it's easier for me to deliver the shite, because I can always fork through the backlog on The Blob.

The Guardian dug through the archives for a story that characterised the state of North Carolina as thick as pig dribble for being in denial about climate change and sea-level rise.  They passing legislation to prevent flood-protection action based on a 2012 report by its own Coastal Resources Commission that sea-level might rise by 990mm in the next 100 years. That was too disconcerting for the interests that were hoping to develop the Carolina coast so it looked like Florida's . . . and make themselves a fortune which they could spend before the sea washed away their whole project. 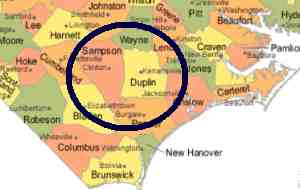 The rest of the press has been dining out on Carolina pork. As indeed have I this last week. Lst weekend, I bought a 900g bacon joint for €3.50, boiled it up and have eaten nothing else (bar some spuds and a handful of peas) all week. How can 'they' raise so much protein, sell it for so little and still make a profit? Well the answer to that is location, location, location. In Duplin and Samson counties, about a third of North Carolina's 9 million hogs are raised in intensive feed-lots. In those, dirt-poor, mostly black and hispanic, counties hogs outnumber people about 30-to-1. There is a certain irony in the fact that, going against the prevailing haemorrhage of capital, China's largest pig company has opened a plant in Duplin County - because labor costs are so low.

Local residents are hardly likely to complain about the smell because a lot depends on the industry: the arable farms are largely producing corn, soy and wheat . . . for the pigs. The pigs of NC deliver 5 million tonnes of wet animal waste each year. Much of this matter is stored in open lagoons quietly evaporating while replacing the coliforms with a succession of different bacteria. One potential effect is the nitrification - denitrification process which converts
That could be good post-Florence because some of the nitrogenous waste has bubbled up and is now back in the atmosphere. The rest is a disaster post-Florence if the 1000mm of rain causes these lagoons to spill over into the surrounding rivers. Then NC will have a eutrophication crisis because in normal water, nitrates are a limiting resource, its absence keeping the growth of algae and bacteria in check. Adding 1000s of tonnes of nitrogen rich slurry, causes an algal bloom as these small plants rapidly go forth and multiply.  Growth requires energy, energy requires oxygen; which is sucked from the water until all the fish, pearl mussels, crayfish and other invertebrates turn belly up and die:

Which causes a bonanza for other bacteria and fungi which have a brief gluttonous feast before they in turn die. It takes years to recover from such an event. And all this shite, with a dressing of dead fish will be delivered to the sea-shore in front of all the lovely condominiums built on a tsunami of climate change denial. And it's not like this has never happened before: in November 2016 lagoon flooding occurred with Hurricane Matthew; it was even worse with Hurricane Floyd in 1999. If you can't learn from your experience you deserve a v e r y  s l o w  h a n d  c l a p, lads.

Stop press: across the state line in South Carolina, they're leaving 650 inmates, and their guards, in prison while evacuating the surrounding county. Now there's a case for cost-benefit risk-assessment analysis. Remember that, when Mount Pelée erupted in 1902,  Louis-Auguste Cyparis survived because he was in locked in jail, while everyone else in the city of Saint-Pierre [N=30,000] died inhaling boiling air in the pyroclastic flow.