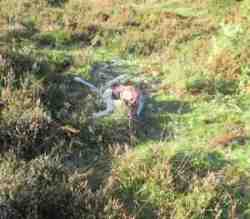 I wrote a few days ago about pulling an unfortunate sheep out of a shallow stream. A couple of people have asked for an update on the sheep. One enquiry came on Tuesday evening in the window between end of class at The Institute and presenting something about Hurricane Florence and pig slurry to the Wexford Science Café. I had intended to have an early supper (call it tea with a massive fry if you want) and maybe a zzzzzzz in anticipation of a late night in a Wexford pub. But the enquiry pricked my conscience, so I threw on a hat, phone, binoculars, camera, glasses, boots and set off up the mountain into the blustery, intermittently sunny, evening. Well I regret to report that EI-00445355-4639E is gone to a better place. She managed to shuffle about 10m from where I left her in the sun on Sunday before pegging out. 48 hours later and she was about half recycled. It seems that being stuck in the river wasn't the fundamental problem. Being sick and weak, she may have tumbled into the water and been too tired to get out.

I went off to the Wexford Science Café [WSC] despite this loss, because life must go on. I was ready to present what little I know about Hurricane Florence and polluted waterways. WSC is a lottery, there are 50 people of the mailing list but you never know how many (and who) will turn up on the night. One of our members works for the county council with the environment protection brief. He knows far more than I do about water (and other sorts light, noise, particulates of) pollution. Inevitably, when I speculated about the adverse consequences of having a storm cause a slurry lagoon in North Carolina to brim over; he had a better and more immediate story. An aged pig farmer was grassed up to the Council by a driver who was delivering feed. The place (which after all was producing food for human consumption) looked worryingly untidy and the smell was something else entirely. On inspection, it turned out that most of the smell came from two dumpsters on the far side of the pig-house. They were brimful of dead pigs, the weight of recent additions causing a certain degree of pressure liquefaction at the bottom. Bubble bubble whiff whiff. Farmer was due in cort this week. Here's 3 mins positive propaganda for a properly isolated slurry lagoon

The first storm "Ali" of the 2018-2019 season has just whistled through the country blowing things down that are usually upright. On my way to work yesterday, a big lump of a branch had fallen off a beech tree and was blocking half+ the road. Two cars ahead of me pushed through the branches and sped on their way. Me, I stopped and started to clear the road. Two young fellers also stopped and asked "Can we help you with that, Sir". I liked the "Sir" = respeck! The three of us were able to shift most of the raffle, including the fat end of the branch to the side of the road. As the boys went on their way, I fetched the bow-saw out of the back of my car and cut off the last bit of obstructing branch. The whole aktionsbaum took less than 5 minutes. People don't generally stop like that. I know because several years ago, when I still drove over the mountain along the back roads to work I narrowly avoided a rock which had tumbled out of the ditch into the roadway. I swerved a bit and carried on to work. When I came back home 8 hours later, the golldarned  rock was still there!   I resolved in future to clear these things up on the first pass rather than leaving such a hazard behind until dark. That is why I try to have a saw, a shovel, jump-leads and a tow-rope in the car at all times. Not much anyone can do about suicidal sheep in the road.

Storm Ali?  It is the first named storm of the 2018-19 Winter weather fronts for Britain and Ireland. That's very inclusive: the original and best Ali [ibn Abi Talib] was the son-in-law of The Prophet and is a quintessentially new-Irish name. Pity that Met Eireann, NewstalkFM and RTE pronounced it Allie like it was short for Alison, rather than actively embracing a bit of cultural diversity. Last year we only got from Aileen to Hector. Let us hope we don't get to the second half of the alphabet this season. Here's the full list: Ali, Bronagh, Callum, Deirdre, Erik, Freya, Gareth, Hannah, Idris, Jane, Kevin, Lily, Max, Niamh, Oliver, Peggy, Ross, Saoirse, Tristan, Violet and Wyn. Note that they alternate boys and girls. I don't think that we have any quintessentially non-binary names yet.
Posted by BobTheScientist at 07:28