Dau.I was born in front of a roaring fire in the depths of Winter in a 'breezy' farmhouse out near Dublin Airport. In 1993, that was  a few km beyond the city limits, so we went to register the birth at the Dublin County offices in Swords. I think it was the 3rd birth that year in the County because almost everyone else would have broken waters in one of three Maternity Hospitals - Coombe, Rotunda, Holles Street - in town.

Three years, and a sister, later we left that rented farmhouse and bought our own halfway up a mountain in the Sunny South East. Our Gaff was remoter (you can't get further from a bus-stop and still be in Leinster) but warmer (it's the underfloor heating silly). In due course, the girls taught themselves to read and soon ran out of books at home. Accordingly they spent several hours a week in the library in Graignamanagh, across the River Barrow in County Kilkenny.  Because they were educating themselves at home and there were no regular school hours, they were often the only kids, and best customers, in the library. 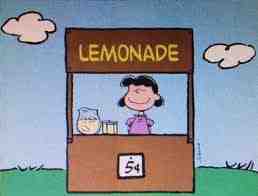 The girls showed an early interest in the catering trade and learned their maths from having to modify cake and cookie recipes. They also became food engineers: if a three layer cake asks for 4 eggs but you only have 2 cake tins what quantities of butter and sugar are needed to compensate for the egg [67% of 4 is not a whole number of eggs] discrepancy?  If we ate all the cookies that were baked we would now be enormous. Dau.I took an entrepreneurial leaf out of Lucy's book and started putting a large box out in the lane on Saturdays with a plate of cookies and an honesty box. Most Saturdays we'll get a few dozen walkers going past the house heading for the uplands beyond. The biscuits would disappear, the cash-box would acquire weight and everyone was happy. What about books? she thought, I'll put out some surplus-to-requirements books with a sign saying "Fund-raising for Graignamanagh Library". That also had some success. When she brought the take into Graig, she was asked kindly to please cease-and-desist. The library and the librarians were paid for by the County Council and income from charitable donations was an accounting nightmare. Nevertheless, Dau.I decided that, when she grew up, she too would be a librarian . . . and be a lot less rigid about money.

She left home, and country, before she was old enough to vote to go to Woowah Steiner 'College' in England. She stayed there working for a few years but saudades and hiraeth tugged at her soul and she resolved to return to the county of her birth. Before she left, on the advice of her Dublin pals, she applied to work as a Librarian for Dublin City. Heck and by Jimmy it takes a long long time to land that fish!  Aptitude tests . . . intelligence tests . . . background checks . . . After many months she was told that she was 67th on a recruitment panel and would be hired if and when there was a vacancy while the panel was still active. In March she was told that her name was now at the top of the list and, if she was still interested, she should report for . . .  medical checks . . . Garda vetting . . . qualification verification . . . and probation. 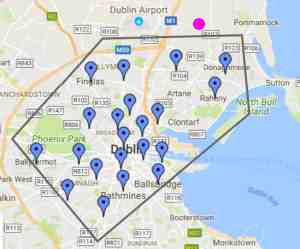 This last week she reported for duty and was assigned as a relief librarian out in Cabra. A relief librarian, like the Son of Man, hath not where to lay her head and must be available for work in any of the 22 branches of the City Library [see map L, pink circle marks birthplace]: lucky she has a bicycle. It's coming up for Bloom's Day, you can practice your Dublin geography by matching names to lollipops:
Ballyfermot - Ballymun - Cabra - Central - Charleville Mall - Coolock - Dolphin's Barn - Donaghmede - Drumcondra - Finglas - Inchicore - Kevin Street - Marino - Pearse Street - Pembroke - Phibsboro - Raheny - Rathmines - Ringsend - Terenure - Walkinstown. To say that I am proud and delighted would be an understatement. On one level it seems a bit limiting to be signed up permanent and pensionable before you turn 25 but the gods get ticked off if you throw away the cards you asked them for.
Posted by BobTheScientist at 07:35