Drums on the Nore

I have been a sucker for drums since I heard Listen For the Noise, a Sheffield samba band, at a street festival in North Shields in the 1980s.  When I was growing up, I was the unmusical one.  On the family piano, I could do the tinkly bits with my right hand or the dong bong dong bong base rhythm with my left hand but not both at the same time. It took a change of country and a change of family (I made up my own) to realise that I could pick out Peggy Gordon or Suo Gân on the tin-whistle. Maybe a change of instrument helped? That Tyneside afternoon, L4TiN and their drums and bells and whistles were just too compelling to leave, and I stood there with my mouth open, eyes glazed and foot tappin’ all afternoon.

Bill Bryson, who grew up in a one-horse midwestern town where he never quite fit in, tells how he opened a National Geographic one day, saw a picture of a boy in leather pants looking across an Alpine meadow, and realised this is me.  As soon as he was able, he left the US and became a European.

A similar epiphany came to me watching Ben Hur, when Ben (C.Heston) is chained to his oar and the Tribune (J.Hawkins) puts the galley and its slave-engine through some sea trials.  I was the bloke beating out the ever-increasing rhythm with two mallets on a block of wood, while Charlton Heston gritted his teeth and tightened his tendons and weaker slaves fainted away on either side only to be lashed back to consciousness. 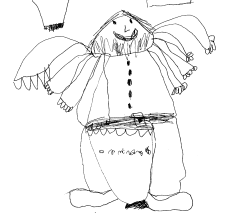 Before the girls left home, we were paid-up members of the Home Education Network.  Every year we'd have a gathering and an AGM somewhere in Ireland and edutainment was put on for the kids.  It was a chance for the parents to natter and for small-small Wexford girls to hang out with their Donegal pals. Imagine my surprise the year we met in Kilkenny when I discovered that one of the children’s entertainments was a drumming workshop with Niall Of The Hundred Hands before he became a famous and respected Sensei on the TaiChi circuit. Niall had seemingly brought more drums than there were hands to play and there was no sign saying CHILDREN ONLY so I stood around and watched a truly amazing performance.  It’s all a bit of a blur because I dropped in on several of his workshops during the day and each one was different.  I remember him dancing like Elastic Man as his new-trained backing group bopped out the rhythm.  I remember seeing two small boys, probably brothers, locked shoulder-to-shoulder in some inner-outer world of rhythmic concentration and community.  I remember ushering a small girl from standing all shy at the door to a seat in the circle and seeing her tentatively work out what was going on and with increasing confidence take up the beat. 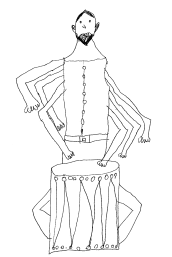 To paraphrase Niall, drumming is not only about making noise, but also about making silence and it’s better still if you listen for the other sounds.  But kids with drums between their knees just want to make the biggest noise they can.  So Niall told a story about a lion <bop> pacing <bop> through <bop> the jungle <bop> and meeting other animals, who thought that they were king-of-the-jungle because they were fast or gaudy or clever.  But <bop> the lion <bop> said <bop>: you aren’t <bop> the king-of-the-jungle<bop>. I’m <bop> king-of-the-jungle <bop> because I can
ROAR
And with the ROAR, the windows rattled and the floor shook and everyone pounded as hard and loud as their little palms could take.  And then the lion <bop> continued <bop> on <bop> through the forest …..and I tell you, Niall was the lion. 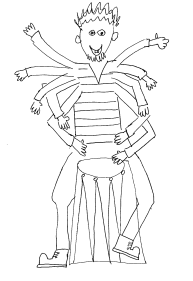 This was just too much fun and after lunch, when there were some idle drums and empty seats, I slipped into the circle and did some bipping, bopping and pounding myself.  With my little tongue stuck out the corner of my mouth, trying to concentrate on something called 3/4 time, flubbing it, watching again, getting back into time with the other kids.  What a lot of fun.

My daughters, then very young, spent the whole day doing stories and games in the garden.  They had a whale of a time.  But I think I noticed a twinge of envy, when that night, using the edge of the kitchen table, I told them the story <bop> of a lion <bop> walking <bop> through the jungle ….
Posted by BobTheScientist at 10:14