Today the FIFA soccer World Cup kicks off with a match between hosts Russia and Saudi Arabia. A lot of the participants, and their governments back home, are going to be taking it all far too seriously. The Boy's Beloved TBB, a woman of remarkable connexion and sagacity, takes the New York Times and recently gave me a dependent read-access online subscription to that newspaper of record. For which much thanks. I try to give it a glance when I wake up in the morning (along with en.Wikipedia for its Recent deaths, In the news and On this day sections). Several times a month, because of this, I'll hold the presses on The Blob and write something time-sensitive and topical. That's part of the reason why I spring out of bed at 0530hrs because I can't dash off 700 words from a standing start in less than an hour. Both of my regular readers prefer to get copy before 0745 to read with their oatmeal stir-about.

So how about this? without the NYT link, I'd have missed entirely the Conifa World Cup Final 2018 in which Karpatalya beat N.Cyprus on the penalty shoot-out.  Below red card for Tibet against Abkhazia: 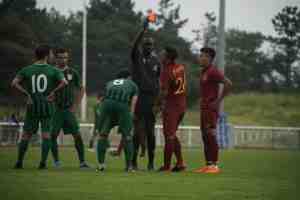 ConIFA is the Confederation of Independent Football Associations which represents a {congeries | gallimaufry | rattle | grab-bag | bailiúchán} of states which don't feel they are represented by their central government. Here are the boys [afaik it's only boys for the moment; possibly because some of these ConIFA places don't allow women out on the streets] who made the final 16:
Give yourself a big prize if you can place more than half of these on a world map. I've hypertext-linked those places where you can get a clue from The Blob. I'm pretty confident about the location of another six states-of-mind. But for Barawa? Kárpátalja = Карпатська Русь? Kabylia = ⵜⴰⵎⵓⵔⵜ ⵏ ⵍⴻⵇⴱⴰⵢⴻⵍ? Székely-land = Székelyföld? really no idea, me. Here is a full list of members. I'm sure I could secure ConiFA recognition for Scientists Oppressed by the Arts Block of Government SOBTABOG if I could only find 10 of my friends who knew the difference between a centre forward [Gauss scores a goooooooal!] and the central limit theorem.

ConIFAis a sort of parallel universe to FIFA and I'm sure they have a cleaner record than FIFA the bigger, super-corrupt body which oversees world soccer. Deconstruction of the whole sorry story of money, power and soccer in the LRB. It was founded in 2013 by Sascha Düerkop and Per-Anders Blind when they announced that Sápmi [United Lappland] would host the first non-FIFA, non-UEFA World Cup at Östersund a city in Sápmi with a considerably bigger population than, say, Barawa.  That tournament of giants was won by the County of Nice. Two years later, ConIFA met in Abkhazia, and, like England in 1966, the home team used their advantage to win the competition. This year's 2018 event was hosted by "Barawa" but actually took place in London sponsored by Paddy Power the Irish bookmakers. Twice as many Somalis live in London as in Barawa.  It's like the second biggest Portuguese city in terms of population is Paris.  It's all good fun until teams <Zanzibar> cannot secure visas to the host country and have to be replaced at the last minute. Or teams <Padana> get expelled for "procedural irregularities". Or members <Kiribati> can't find enough money to send 11 players to some distant location. I'll try to remember to follow events in 2020.

Note: Konnichi-wa is short for konnichi wa gokiken ikaga desu ka? or 今日はご機嫌いかがですか？= How are you feeling today? in the same way as folk at The Institute interpreted my bright Hiya as "How are you?" and told me <TMI> just exactly how they are</TMI>. After a while I changed the greeting to "G'day" in honour of my sagacious Kiwi cousin Trevor, which scotches any more than a token response.
Posted by BobTheScientist at 07:30