I was down in Cheekpoint, Co WD, a tuthree weeks ago. I haven't been back since we went on a squirrel-walk in February, and it was time to make some social calls.  And also to visit the Russianside Book Exchange (pictured right), which was put up/out in the Summer.  I brought a handful of books reluctantly culled from our thousands and took two away, so that is clearly a working model for Community even if it is really bad for multinational capitalism.

I made the time to read We Go A-Fishing by A.R.Scammell, rather than all this class-prep and bloggin'.  I waited until there was a full gale and went out and read it in the lee of a hedge to avoid the whipping horizontal rain.  It is not the sort of book you should read lying down on a sofa beside a roaring fire, because it's all about the Newfoundland cod fishery.  In particular it's about the community living on either side of Main Tickle, a narrow gut about a mile (1600m) long and 40 fathoms (75m) wide, between the two largest of the Change Islands.  The book finished up in Co Waterford 20 years after it was published in St.John's NF in 1994, because there is a strong historical connexion between Waterford and Newfoundland driven by the cod-fishery.  The cod-fishery was driven by the requirement for Catholics to eat fish on Friday and salt-cod (Gadus morhua (S.I.), bacalhau (.PT) bacalao (.ES)) was what made this possible for the burgeoning population of Catholic Europe from 1500 to 1995.

The book is a record of reminiscences from the Oldest Salts still upright compiled by a local man who saw that when these old boys passed on, nobody would believe the hardship they went through to scrape a bare living at the very edge of the world. My Dad was a sailor too, he grew up in Dunmore Co Waterford, and joined the British Navy aged 14.  He had terrible varicose veins because, all through his 20s, he had to stand watch-on-watch on the open bridge of MTBs and destroyers getting wet to his drawers despite the sou'-wester and oil-skins.  But at least he didn't have to split cod on the heaving deck of a 100 ton schooner surrounded by slobby ice and exposed to a whistling blizzard of horizontal snow.  You get salt-water boils from Staphylocococcus aureus infections where the saltwater and the edge of your water-proofs chaffs your wrists and your neck.  It gets so cold you can barely hold the knife.  You carry on splitting until the catch is salted away even if it means working all night; and you're up again at dawn because there are more fish down there now which might not be there tomorrow.  Sydney Mines is as close as I got to Newfoundland when I was doing the field-work for my PhD thesis in the Canadian Maritimes: I couldn't face the ferry to NL let alone work my passage in a schooner.

On the piano at home, there was a beautiful wooden scale model of a schooner.  The name "Princess" was painted in gold on her transom.  She was about 60cm at the waterline and was one of three, "Duchess" and "Marchioness", almost identical ships made for my great-grandmother and her two sisters in the middle of the 19th Century.  My father would try to educate us by conducting a naming of parts for the sails, the corners of the sails, the edges of the sails, the halliards, the stays.  So I'm not totally green to the language of the sea, but I confess that some paragraphs of WGA-F are almost completely opaque to me.  "Charlie was cooking fish and brewis from breakfast but he let the brewis bag fall in the gum bucket, which was enough to make a saint cuss". Not least because they are taken down verbatim in the strange Elizabethan Hiberno-English that they speak in Newfoundland.  I have a good friend, now a GP in Co Wexford, who did a stint in a cottage hospital on Fogo, the island next door to the Change Islands.  That was 40 years ago and although he heard and grew to understand what his patients were saying to he was too busy to take linguistic notes. 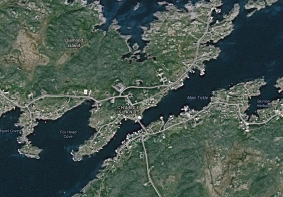 Here's a zoom in to the Main Tickle, which was chosen as a site of settlement because of the shelter it provided for shipping.  At the height of the cod-fishery there were so many ships moored that you could walk across the water without getting your feet wet.  The cod was getting scarce in the days when the informants were growing up.  So they couldn't do that any more, but they did need to go courtin' on either side of the channel.  There was a brisk trade in 'borrowing' boats for assignations on the other side.  You can see that now, in contrast to Ketchikan Alaska, they have a bridge which they call a "causeway". The traffic which used to be all sea-borne and coastal now goes by trucks on the roads which the Canadian government have driven across the landscape. So you can't sail through the Main Tickle now even if you wanted to.  All Change, indeed!


Posted by BobTheScientist at 06:25