The house that Felix built 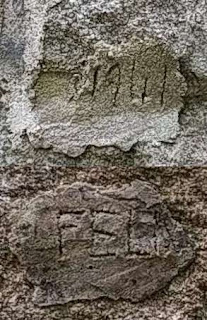 At the risk of sounding like The Club Bore, we've been interested in Carlow granite since my grandfather's grave-marker was carved out of the stuff in 1957. Who knew back then that 40 years later we'd come and live in a farm built of Carlow granite rubble-in-courses. R-i-C is a way of using the available material to make vertical walls. The stone-mason does their best to find 'face-stones' which have two flattish faces, more or less at right-angles. They might have to <tonk> off some lumps to make the stone fit, or sit, neatly in the growing wall. "Through-stones" are another high-value asset: these are stones which are as long as the wall is wide [typically 500 mm]; they can serve as ties to link the inner and outer face of the wall and give it more structural stability.  Big stones are better than small stones because they require less mortar. The biggest stones will often be found at the base of the wall because they are heavy to lift. But you don't want to be left with only small rubbish when you reach the top of the house: see Psalms 118 v 22. The last course, has to support the roof, after all. The stone mason will often employ a mate who can help with the heavy-lifting and mix the mortar.
Do not use sand-and-[portland] cement for mortar [or re-pointing]! It is too rigid for miscellaneous rubble stone walls: the coefficient of thermal expansion is different for different materials - yes, even different granites - so you need a packing material with a bit of give. Lime mortar is yer only man. Lime mortar is a witch's brew of slaked lime [calcium hydroxide]; coarse, but not too coarse, sand; cow shit at 5% w/v and water. It is nicely plastic even when set: allowing each stone to heave about in the sun under its own expanding imperatives without disturbing the other stones in the area.

The face-stones and through-stones will be packed with rubble: smaller stuff to fill the middle of the wall and the awkward chinks and gaps in the faces. A day's work will be a 'lift' or 'course' of 400-450 mm vertical which is finished to a horizontal level from which to start the next day's work. They were quite fussy about these horizontals: we have slates and fire-brick shards embedded in the wall to bring up a bit of a dip. It was never intended that the structure of the wall would be revealed to human gaze - we spent a lot of time chipping off the plaster, which gave the rooms a smoothe public face, to reveal the bricolage of structural function.

A mason once told me that the trick was to never return a rock to the pile - find a place for it somewhere. in the work. And in ainm Dé, wear steel-capped boots! Rubble-in-courses won't do for the [door and window] openings. These are often finished in bricks which cost ready money, but have uniform dimensions and make a definitely straight vertical edge which makes the carpenter's work easier. The lintels are typically made of roughly squared granite slabs which have been split from the living rock with hammer and wedges. 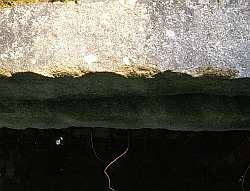 You can see the wedge marks both on the lintels and on the lump of rock which got left behind on the hill. I've clipped a detail [L] to show the wedge-marks highlighted in the oblique light of the setting sun. It also shows that the lintels typically come as a pair so that they can bridge the half-metre thick granite walls. The pair shown left are 2700mm = 9ft long and they have both been i) split from a suitable boulder on the hill ii) brought down to the yard on a sled iii) lifted unto the wall-top. All without the help of petrol or steel-capped boots. We live in The House the Bomb Fell On in 1941. Actually we don't, that would have been wet and draughty with half the roof blown away. We live in the house constructed from the rubble in the Summer of 1941. We know the stone-mason's name because someone told us when we arrived. But also because he humbly left his mark on two smears of sand-and-cement on the gable-end of one of the sheds which was also reconstructed at the time [see pics at top]. We have no idea who his mate was; it may well have been a rotating meitheal of local men who'd be happy to help re-house their neighbours if it was too soggy to make hay. 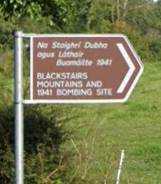 The House of the Bomb is of sufficient local interest that it has acquired a brown touristic interest sign the size of a bed-sheet that the county council installed at the bottom of the lane a couple of years ago. I could have been over my dead body about it; but I firmly believe that we don't own the house, let alone the Ringstone, we are holding it for future generations. "We have not inherited the land from our fathers, but have borrowed it from our children.” Probably not Chief Seattle: more likely Wendell Berry. [prev]. Nevertheless, the sign is on Friendface, GooglerMaps which means a trickle of randomers appearing in our yard for their Sunday afternoon entertainment. I usually make time to chat, especially if the visitors have asked about parking rather than, like, parking.
Posted by BobTheScientist at 07:33