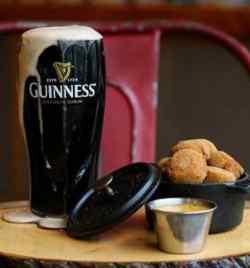 If you're getting complacent in your St Patrick's Day nostalgia, the picture above will shake you to your boot-heels. It was put up on Social Media to promote Paddy's Day at the Railtown Café in Vancouver BC and created a diplomatic incident drawing adverse and ironic comment from all over. Railtown is the sort of place that shows a salad with a slogan "If looks could kale . . ." The dribbly Guinness picture has since been removed from the interweb and if you turn up there today with an Irish passport, you'll get a free pint and a chaser of Old Jimmy. I was writing the other day about pretentious gittery. There are experts in any field and there are people who go through the motions of being a connoisseur [from the French to know] but are basically all bark and no trousers.Wine is a case in point. Far too many men make a big palaver about choosing the wine at a restaurant and then make a big show of congratulating themselves for making such a wise choice. They'd be more honest if they just scanned the wine list and chose the second cheapest claret.  Those who drink Guinness used to assert that they could taste the difference between a pint brewed in St James's Gate in Dublin from one brewed in Park Royal in West London. But they never put themselves to a blind tasting under controlled conditions; they just mouthed off about how this pint wasn't the same as that one and how they longed to be back in Morrissey's of Abbeyleix - which was, and is, conveniently halfway between Dublin and Cork before they built the motorway.

25 years ago, I used to drink pints of Guinness a couple of times each week to keep the boss company but my heart wasn't in it and it was a relief when the Summer came round and we could switch to lagers. When I got old enough to resist peer-pressure, I switched to Smithwick's ale which is less of a challenge and less full of hang-over inducing congeners: you may keep your fusel oil, tannin and acetone.  The Irish Bar is a marketing device which has garnered million$ for those who export Irish road-signs and photographs of the 1923 All Ireland GAA champions to Kuala Lumpur and Budapest. Whatever else they serve, there will be Guinness on tap as that is a quintessential part of the Oirish Experience.

Years ago, a couple of years after I'd met my pal Pepe Malpica, The Beloved and I were on holiday in Spain and spent a couple of days at Pepe's gaff in suburban Madrid. He arranged for me to give a seminar at his institute and I was happy to do that as part of the the process of scientific networking. I reckoned it would also increase his street cred by having an foreign national giving a talk there. After the talk, he propelled me along the corridor to meet The Director - who'd been far far too busy to come to the talk. We were introduced, we shook hands, we made small talk for 90 seconds and then we were bounced out to the PA's office. Pepe talked rapidly in Spanish, I was told to sign a slip of paper and an envelope was thrust into my hands. In the hall outside, I opened the envelope to reveal a fat wad of pesetas - something like €200 is today's money. I was amazed and immediately offered to cut Pepe in for half. He was appalled and in full hidalgo mode said that I had impugned his honour by suggesting such a thing; the money was an honorarium and standard practice in that place for foreign dignitaries.  Anyway, he continued, I've got a treat for you.

Apparently his presence wasn't required for the rest of the afternoon and we drove for many miles through the suburbs of Madrid until we pulled up outside an apartment complex with a little row of retail outlets at street level. One of them was an Irish Bar and we spent the rest of the afternoon in there. He wasn't above letting me buy the first round of pints from my new found wealth. In among the usual paraphernalia that you get in such places, there was a python in permanent siesta mode behind the bar in a glass case. That was either super-ironic - St Patrick is supposed to have driven the snakes from Ireland - or just bonkers. I don't think it will catch on in Abbeyleix.
Posted by BobTheScientist at 08:30