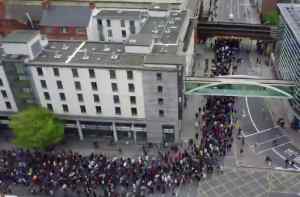 We had a nice airing, Dau.I and I, on the March for Science yesterday. Our poster only works if a) you are aware of the ironic rally slogan “I’m only here for the violence” and b) you have sufficienct chemistry to know that valency refers to the number electrons available to an atom for chemical reactions. I had to explain part a) to two of my scientific friends, one of whom invited me to make a Venn diagram to show the intersect between the violence-meme-gettit people and qualified chemists, hmmmm N << 10 he suggested. Another ironic poster which made an appearance (not for the first time!) yesterday was “Up with this sort of thing” to suggest that anyone who attends a rally or protest is a member of Rent-A-Crowd. At least our “Only here for the valence” was original if not universally comprehensible. Dau.II told her sister that "the march will be top-heavy with people who think they are as clever as Dad thinks he is clever".  If you have call-and-response to promote internal solidarity then:

What do we want?
Evidence-based policy.
When do we want it?
After peer review.
works well enough. But if the purpose is to push out a message to passers-by, or the fuming folk on the top deck of a bus delayed by your science-solidarity rally then 'evidence-based policy' is not terribly helpful instantly forgettable mouthful and 'peer-review' is mere jargon. In the Irish Times, the Provost of Trinity College, a bio-engineer, is quoted as advocating policy-based science. That's bonkers got lost in translation. No scientist I know is willing to be told what to research by some policy-wonk.

Depending on whom you ask, either 600 or 1,000 people were on the March. That count was surely enough to allay my concern that only three handfuls of moaners would turn up to inconvenience the traffic. The March was originally conceived as a show of solidarity with our brethren in the benighted USA where they seem to be parking 60 years of scientific progress in medicine, agriculture, space and genomics and going back to witchcraft and blood-letting. Whatever about solidarity with my pals for the US [two of whom were out in Boston], I was delighted to bump into lots of old friends from this side of the pond; people whom I haven’t seen for a decade. I bodged up a prototype travelling placard consisting of two bamboos, string, duct-tape and a roll of plastic. Because the prototype worked, in short order I had 4 placards (and only two hands) 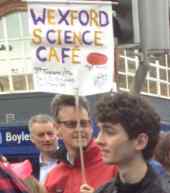 I handed off the Wex Sci Caf  poster on someone who was willing to carry it and never saw it again but Twitter did [L]. A handle on the other slogans can also be had through Twitter. I had a blank/spare in case my wingman, Dau.I, had a creative dove descend upon her. Someone had suggested on the wireless that every scientist at the rally should bring a non-scientist with them. That's important because otherwise the whole thing looks like a Me Me Me demand for more support and recognition - eliciting "they would say that, wouldn't they?" It turned out that there was another rally / protest in town starting about an hour after the March for Science. That was to express concern that the new 21stC National Maternity Hospital would be built by the tax-payer but administered by the Sisters of Charity, a religious order that owns St Vincent's Hospital. We went over there to see what was going down after the science stuff finished up. "We'll have Nun of that" was the level of sloganism.

The juxtaposition of the two rallies presses the button for a worry of mine which I has trying to articulate with my Skeptical About Science slogan. I talked to a young chap at the science rally who was carrying around a "more science | less religion | in our schools": look at my slogan, kidder, you want to be careful about those scientists who believe in evolution . . . but couldn't marshal the evidence for that belief. I know, I've been there.

Posted by BobTheScientist at 08:12