I'm only here for the valence

<The pictures on the right are from the March against Eighth>
Are my ancient bones too old for a bit of protest? Not at all, so long as there are no razor-wire barricades, water-cannon, tasers, or baton-charges by the police.  It's more than 40 years since I was on a march in Dublin protesting about the lack of student grants.  And last Spring, with exquisite poor timing, my Union went on strike on the day a general election was called: so press coverage was almost entirely elsewhere. It's not entirely alien to my culture, then.  We met at the Wexford Science Café this week on Tuesday 21st March as we do every third Tuesday of the month.  I presented an executive summary of the Oroville Dam crisis which is now dissipating from a critical to a chronic problem. It's cost in excess of $100 million just to avert disaster and nothing has been installed to upgrade the ageing infrastructure there. But that's for another time. 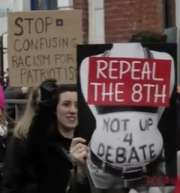 The Wexford Science Café WSC has agreed to March in solidarity with others in the USA and elsewhere a month from now in the March for Science. Be careful how you put this information about. The science policy people in Dublin will only get nervous at the prospect of the WSC contingent appearing on their doorstep . . . on a Saturday when nobody will be in their office. March for Science (Ireland Inc.) are calling themselves sciencemarchie which rather more cute than frightening. If you're in Ireland, you may decide to put up a few posters [Link] in your local library or laboratory. If you are in la francophonie, you'll have to make your own. I imagine that there will be similar events Marche pour la science in France. Look out in a university town near you: they may even have affiches.

My girls were marching earlier in the month [picture of march] to assert their rights to reproductive autonomy. I was skyping with Dau.II the night before and she raised her fist a lá Black Power and cried "Fuck the Patriarchy".  I reminded her that, as a patriarch, I could hardly go hollering that on a women's rights march with out getting arrested for solicitation.  aNNyway, back to the riot March for Science. The event is to coincide with parallel marches in the USA and also with Earth Day. Earth Day not to be confused with Climate Day the following week 29th April 2017; or World Environment Day 5th June 2017. I’m planning to be there on 22/04/17 with my I’m Only Here for the Valence [violence] t-shirt.

Unless you did chemistry in high school, that bit of clever-clogs wit may be lost on you. Valency is a fundamental property of each element: its combining power. It's all about the number of electrons in the outer (chemically available) shell of each atom.  This is most easily shown by the series of hydrides for the elements in the top line of the periodic table.

As you travel L to R, each element gets one more electron, so needs to marry one less hydrogen atom to achieve stability. Thus we have CH4, NH3, OH2, FH1, or in words methane, ammonia, water, hydrofluoric acid. We usually write the last two differently H2O and HF, but I'm damned if I can remember why.  There is no BH5 and I can't remember why that is unstable. So Carbon has a valency of 4 etc.  These orderly relationships and the predictable changes in properties as you go L-R or up and down the periodical table was one of the things that fell me in love with science as a teenager.
Posted by BobTheScientist at 07:28