Last week, we had a day off at The Institute and I legged it up to Dublin to hang out with my old research group.  I had an interesting tuthree meetings, including inching forward a chapter of a PhD thesis and a revision of a revision of a paper that may, this time, get 'over the line'.  One of the referees, looking at our paper for the second time said, in effect "this is much better written; so much so that I can now better understand the flaws and over-interpretation of their analysis".  You have to be sympathetic, these poor chaps referee papers for free as a way of paying their taxes to the community of science and have to wrest time from their own research and teaching commitments, not to mention their families, to perform this thankless task. But you also have to give us some slack. Our paper is mid-wifed out of a PhD thesis and has tidied up a part of the immunological world, we've added some more data and reconciled and teased apart two contradictory findings elsewhere in the literature.  If our paper isn't published, those findings will continue to propagate their confusion.  It's also the first publication for a couple of bright young scientists starting his careers.  Obviously they/we want to big up their story and place it in a larger context - or it will seem rather a waste of all those months slaving over a hot eppendorf and it won't be published. It's the referees job to rein us in. 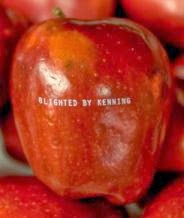 After a well-spent day of that, I drifted off to the Science Gallery to see what was on show there. For me, the most resonant exhibit was Blighted by Kenning, a bio-art project by Charlotte Jarvis.  Like Craig Venter, Thomas P Hopp/Dr. Peyton McKean and me, Jarvis is using the genetic code to write messages.  She has chosen to write the first article of Universal Declaration of Human Rights into the DNA of a bacterium which was then used to infect apples.  The apples were sent to places competent to interpret the DNA with a challenge "Read This!" with the Alice rider "Eat me!" That's quite a mouthful and quite a respectable contribution to bridging the gap between the two cultures. But, just as we were chid for over-interpreting our data, Jarvis has over egged that pudding by launching the project from Den Haag the home of the International Court of Justice. "The piece uses genomics . . . as a symbol for the idea of global morality, of ethics that are intrinsic to our humanity.".  WTF?  I think she means that by inserting some extraneous text into a bacterial genome she is blighting the apple in the same way as GMOs blight our planet.  If our referees would like to moon-light critiquing the language and pretensions of the Arts Block, they won't be short of work.

But hats off to Jarvis for bringing the word Kenning out of the academy.  A kenning is a literary metaphorical phrase particularly used in early Eanglosaxish but also (with a different word because it is The Classics) in Homer. For Homer, the sea was always οίνοπα wine-dark which has led some modern scientists to postulate that all the ancient Greeks were colour-blind.  Some kennings are so common in the (nautical and military) language that has come down to us from the likes of Beowulf or The Battle of Maldon that they are clichés. hron rad whale-road is the sea; svana fjöll swan's mountains are waves; grand viðar wood's bane is fire . But what about hjálms fyllr helmet-filler for sword - that's so disturbingly visual that it should be the title of a particularly violent graphic novel.
Nice essay here.
Posted by BobTheScientist at 05:31