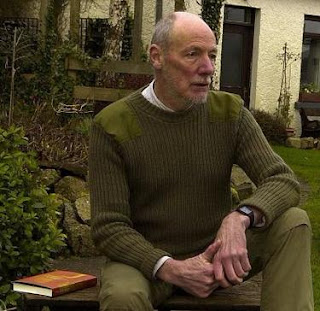 Damn damn damn; Tim Robinson, cartographer, tale-hearer and archivist is dead: swept over the cliff by Covid-19. Where to start? Let us try Yorkshire, 1935, where/when Robinson was born. From then the trajectory is crinkle-crankle because it was hard to sqeeeze his restless curiosity into a single channel going somewhere. He was always willing to be diverted down a bohereen - either physical or metaphorical or both at once. He was smart enough to get a degree in mathematics from Cambridge but wouldn't allow that to distract him toooo much from his need to capture the world with a pencil and cartridge paper. What kind of 20-something takes a job teaching maths in Istanbul at the very edge of Europe. Clue: I is for Interesting; I is for Interested.  Indeed, I seem to remember that he took the extra step away to live on the Asiatic side of The City. Constantinople was a pretty out there career move for a young chap who was going places in any traditional sense.

In 1972, he found himself [Found Himself] at the other end of Europe visiting the Aran Islands. The post-mistress lamented the lack of a map to inform tourists about the extra-ordinary landscape that enveloped them. Robinson took a deep breath - he inspired - and started walking. Round and over and round and back and when he returned to where he started he was a changed man and cartography was a changed art. Mappers traditionally used Gunter's chains and theodolites and note-books of water-proof paper. Robinson also used his ears to tune into birdsong and the susurrus of reeds and the Irish language as he recorded the names of knolls, walls, fields, strands, crosses, byres and pools. He sponged up the dinnseanchas the place-lore of the austere limestone landscape.

It wasn't just a naming of parts [blobpprev] where you ask The Oldest Inhabitant the names of every place s/he can remember. You never get to the end of it in that way. As Barry "EastWest" Dalby [Comeraghs - Blackstairs] my cartographic cara comharsa asserts: the locals will always try to wind you up for having failed to interview Sean Even Older Salt who died last Spring in the fullness of his years. The names help you make sense of the human landscape - not forgetting that all the landscapes of Europe have been irrevocably changed - some would say despoiled - by the vaunting ambition and rapacious exploitation of mankind. But they aren't the landscape itself - The Map is not the territory [obligatory Korzybski ref]. Robinson was both a realist [the maths] and a romantic [the arts] and weft the two cultures into Stones of Aran two books of explanatory magical power . . .. rather more than the postmistress had wanted and much later than her fondly imagined publication deadline - the first book took about ten years and the second about the same. It's a bit like PrairyErth, William Least Heat Moon's deep map of a single county in Kansas. Travel, like Basho's Narrow Road to the Deep North or my own escapades to/fro Santiago, opens the mind. But it takes deliberative investigation, like Louis Agassiz' back-yard summers, to populate that empty vessel.

That was only 20 years of the man's youth devoted to the magnificent in minutiae. I imagine him pausing to get his breath and reflect after this wonderful achievement . . . and then girding his loins. hmmm if A is for Aran, then the next step might be B is for Burren. And it was so. And further C is for Connemara. Each related landscape recorded, reflected in breeze-ruffled grey lough, lit by rainbows, informed by fairies and dreams. Hats Off and Damnation to Covid!