That would be John D Burns who was born in Merseyside in the the mid'50s. So he's my age ± (mostly -) a year and wore the same sort of clobber and listened to the same sort of music as me as I grew up 300 km South and East. He started hill-walking with his mates, yomping up hill and dale in the Lake District and completed the Pennine Way while still a teenager. You have to be nineteen, ignorant, unimaginative and immortal to set out on such a trek in totally unsuitable shoes, with hopelessly inadequate clothes stuffed in a ruck-sack designed by a sadist for masochists. You have to have bottle to finish the task. As a student, and later as a social worker, he'd get out of town all possible (and some impossible) weekends and head for the hills. That involved exhausting journeys by train or car to a suitable jumping off point until he applied for, and landed a job in Inverness. That meant he was closer to more challenging hills thereby (although nobody thought in those terms, then) slashing his carbon footprint to service his passion for bleak challenges. 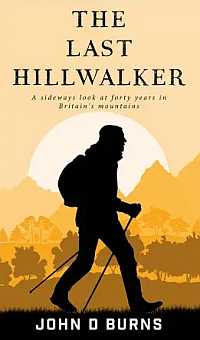 I know all this because I've just yomped through The Last Hillwalker his memoir about a life-time in uplands. It's readable because it's written with a bluff straight-forward narrative drive with a judicious amount of cliff-hangers to drag you into the story. cliff-hangers? yes indeedy, because for John Burns trudging through black bogs in saturating cloud soon became insufficiently challenging and uncomfortable. He must go vertical and later he must go vertical with ice-axe and crampons - and not only in the Cairngorms but in the Alps and Canada as well. By taking risks and pushing through his comfort zone he got better at his craft; learning it seems by the seat of his pants.

Because he was out often and in all weathers, he was able to save a few people's lives. Ordinary people, like himself, who had been caught out by mishap or the unforgiving hills. Later on, when he'd built up a real depth of experience and local knowledge he joined the local branch of the Mountain Rescue and saved more people in really tough predicaments. And yes, brought in a few bodies too. I like very much his insistence that he must give back to the community, the time and skills that he'd built up over decades at the edge. Mountain Rescue go out willingly because, challenge; but also from a strong non-judgmental sense of it coulda been me. He calls himself  The Last Hillwalker from his sense that kids are no longer getting their kicks from scrambling up Helvellyn in shorts and gumboots. The people he tends to meet up on the skyline are folks of a similar vintage who grew up before the cheap thrills of Call of Duty and Assassin's Creed.
Posted by BobTheScientist at 07:17