Reasons to be cheerful.  I've just finished an 11 week teaching term and we're still having loadsa fun.  We've had a couple of days of heavy rain across the country, Enniscorthy flooded at Templeshannon this afternoon and there was a lot of surface water on the roads to and from work, so I was duly grateful I wasn't coming down from Dublino on the bus and getting detoured though Bray and Wicklow because the main road was impassable.  We went north this evening to Tinahely Courthouse to see Jiro Dreams of Sushi and had to take a back-road detour because the Sillellagh-Tinahely road was flooded out. 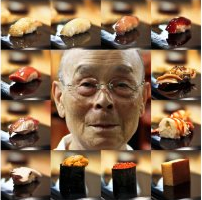 But I was so glad I made the effort because it's a wonderful documentary about this workaholic who makes Michelin star sushi in Tokyo, and has been perfecting his craft for 75 years!  He is both Shokunin (craftsman) and Sensei (teacher) to a handful of apprentices who spend a year perfecting the art of squeezing hot-towels before they are allowed to scale the fish.  Curious about the idea of working in and on a small-small project like making a gallimaufry of tuna, wasabi and rice again and again and again until it becomes the quintessence of tuna, wasabi and rice.

Ah So
Posted by BobTheScientist at 23:27