IF
you can read English
ANDIF
you are one of the last two Earth people who haven't read
Elizabeth Gilbert's Eat, Pray, Love: One Woman's Search
for Everything Across Italy, India and Indonesia
ANDIF
you're a bloke
THEN
you needn't bother. Read instead Bill Buford's Heat: An Amateur's Adventures as Kitchen Slave, Line Cook, Pasta-Maker, and Apprentice to a Dante-Quoting Butcher in Tuscany. I just finished Heat having received it as a transatlantic gift from my pal P in Massachusetts. They were both published in the same year - 2006 - but Gilbert's memoir went viral (it must have been the Oprah endorsement), so that even I picked up a copy and read it; but Buford's memoir achieved only a modest success.  On amazon.com today, Eat is #1,681 in the make-profit-for-Amazon rankings but Heat Languishes at #52,270. To put that in perspective The Brother's Book of General Ignorance [2007]  is #18,064. You can't explain this by the quality of the writing. Buford brought Granta back from the dead in 1979 and was editor there for 16 years before returning to the USA to work for the New Yorker. So he knows the difference between a dangling participle and a split infinitive and can drive a story forward. Like Gilbert, who was a successful New York literateur, he had a mid-life crisis, gave up the day job and went to work in the catering trade. While Gilbert was eating the good life in Italy, Buford was in the kitchen cutting himself, getting showered with hot fat and being hazed by other, younger, more competent cooks for not being fast enough. It was brutal but he got better, he damaged himself less often and he learned how to do the mix of chemistry and ikebana that is high-end cheffery. He served his apprenticeship in Babbo under the ruthless tutelage of Mario Batali the co-owner of that trendy eatery.  The front-of-house business partner is Joe Bastianich who reached celeb status by being one of the judges on Masterchef along with Gordon "this is RAW" Ramsey and Graham "puttin' on the pounds" Elliot. Buford's growing assurance and competence reminded me of me getting better at my own [bookbinding] knife-skills and also at drumming.

If you enjoyed Eat but felt a frisson of unease in doing so, it might help to read the deconstruction / review in Eat, Pray, Spend by Joshunda Sanders. One aspect of the discomfort is the productification of self-help, self-actualisation, empowerment and nirvana. You have to buy your satori with a personal trainer; or a package holiday Trekking To Machu Picchu For Cancer; or going to Indonesia to build huts for the local carpenters; or having a kale and colonic irrigation weekend in a Spa Hotel. Here's a report on gluten-free, booze-free, free-wifi and jacuzzi Ranch 4.0: which offers $1,000-a-day weight-loss walks in California. Call me judgemental , but you could resolve to be happy enough in your own skin, send the £500 or $4,000 to your favorite charity and not muddy the waters between your good and the planet's good. Or as Ms Sanders puts it "If more women become willing to put aside their fears, open their eyes to cost-free or inexpensive paths to wellness, and position themselves as essentially worthy instead of deeply flawed, priv-lit could soon migrate to a well-deserved new home: the fiction section."

The option of giving up the day job probably doesn't appear possible to those with a mortgage and three kids in school, and so Buford's pilgrimage is an unattainable privilege to most of us; but at least it doesn't seem to be insufferably self-indulgent. He must have had, or developed, some bottle to survive the boot-camp mentality of the catering trade.  And he must have upped his game or he wouldn't have been tolerated as a line chef juggling meat to precise schedules on a melting stove top. At the end of my disastrous six-month stint as an apprentice commis-chef in a biotech laboratory, I was immeasurably better at the game than when I started.  But I then knew enough to know that I'd never be really good and it was still hugely stressful, so I stepped sideways into a more cerebral, less hands-on area of research where I was less of a danger to myself and others. I could have done the lab-bench but I would have been expensive, unwittingly wasteful and unreliable. 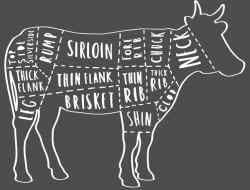 After learning a certain expertise in pasta and meat in a high-pressure NYC Italian restaurant, Buford wants more; he wants to go to the fons et origo of making food from cows and wheat. Dropping a Latin tag or parsing an Italian dialect phrase is the sort of indulgence from which Buford, ever the editor, can't stop himself. ANNyway he spends time at a small restaurant up a windy road in the Apennines where they make the World's best tortellini. There he is taught the recipe and method on condition that he doesn't share it with his NY mentor Mario Batali. Finally having cooked so many different cuts of meat, he needs to know where they come from. He starts by butchering a pig in his New York apartment and then ships out to Chiantishire to work for months as an apprentice in one of two butchers in a tiny village between Firenze and Siena. There he hones his knife skills and learns enough anatomy to separate out underused, and so more tender, muscles from a leg bigger than his own torso. See the anatomy of a British beef [L above] and compare it to a French one - the names but also the cuts are different. One thing that struck me about the book was how indiscrete it was: as a fly-on-the-wall in the kitchen he saw and heard a lot of sensitive interpersonal stuff which gets blurfed out in the book to make a neat anecdote in the story. If I was a pal of his, I'd be more circumspect about confiding in him after reading Heat. All my friends know that I'm likely to broadcast any interesting conversations we have to the uttermost shores of Kamchatka.

Heat is all a bit of a gallop, so it's only in the last tuthree Italian pages that we get a hint that the characters in the book, including maybe Buford, have values that transcend $$$ value. In our benighted world that is increasingly rare. His friend Enrico produces a particularly intense olive oil by harvesting really early before the fruit fill out and increase the volume of oil produced. "Less is more" he says. He also refuses to make oil from a young tree because that affects the sustainability of the olive grove "I'm not making oil to make money", he says. And again "I'm not interested in bizzziness" and further "I do this only for the smell". Buford's time in Italy is a lesson, if not a reminder, that food comes from living things and is not, or shouldn't be, a commodity like flat-screen TVs or foreign holidays. Jaysus man, you put the stuff in your mouth, surely you'd be more curious about where it had been?